10 things to know about the WA Panel Report 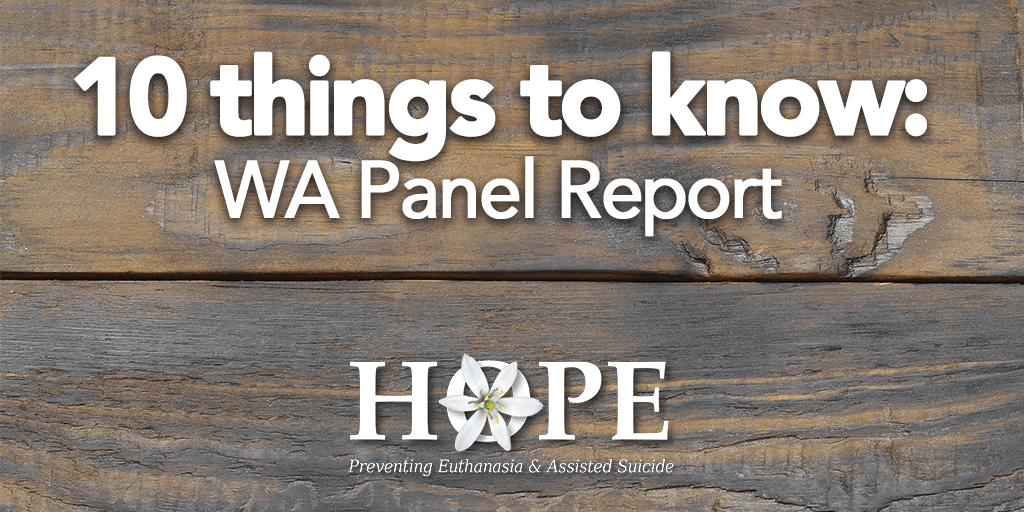 On Thursday, the West Australian Ministerial Expert Panel on Voluntary Assisted Dying released its final report on the implementation of euthanasia and assisted suicide in that state.  It gives a detailed insight into what a euthanasia and assisted suicide regime will look like, including the aspects of the Victorian regime that they have sought fit to dispense with as too restrictive.

Here are ten things you should know about the report.

The Victorian legislation prohibits medical practitioners from starting a conversation about euthanasia or assisted suicide with a patient.  This was done in an attempt to ensure that the request did in fact come from the patient, and they were not influenced by a medical professional in a position of trust and authority.

Western Australia has dispensed with this barrier and will allow doctors to suggest euthanasia and assisted suicide to their vulnerable patients.

2. No specialist care is required

Even though the co-ordinating doctor for a euthanasia or assisted suicide request has to provide the patient with information regarding the nature of their disease or illness, the prognosis, any possible curative treatments, any available palliative treatments, and confirm that it is reasonably foreseeable that the patient will die in 12 months, the Panel recommended that “neither doctor is required to be a specialist regarding the person’s disease or illness.”

This is concerning for two reasons: firstly, because there is no requirement that a patient first receives specialist treatment or advice before being prescribed lethal drugs, and secondly, because the practitioner is expected to be able to sufficiently explain to the patient a condition in which they do not specialise.

3. Nurse practitioners will be allowed to act as the second practitioner to authorise euthanasia and assisted suicide

The Victorian legislation requires that an assessment of a patient’s eligibility for euthanasia or assisted suicide and their capacity to make the decision be assessed by two medical practitioners, independently of each other.

The Panel has suggested ways that access to euthanasia and assisted suicide can be made easier for those in regional or remote areas (eg, not requiring specialist care and only needing one doctor to sign off on the euthanasia request.)

Ironically, the Panel reasons that the process for euthanasia and assisted suicide “must not disadvantage people living in rural and remote parts of Western Australia,” and that access for all people should be ensured.  It would be good if similar concerns about access were raised in relation to access to specialist medical care or even to medical practitioners.

Additionally, the Panel recommends the appointment of “care navigators” to assist people navigating their way through the euthanasia or assisted suicide process.  There is no similar requirement or recommendation for government-funded “care navigators” to ensure people have information and access about other end-of-life care options, including palliative care.

5. Mental illness will not prevent a patient from being eligible for euthanasia or assisted suicide

The Panel has recommended that mental illness not be a barrier to a person accessing euthanasia or assisted suicide, and there is no requirement for expert psychological or psychiatric care in these situations.  The only thing a doctor needs to be sure of is that a person has the mental capacity to understand the decision.

6. The test of suffering is subjective

In its report, the Panel recommended that the eligible condition “is causing suffering to the person that cannot be relieved in a manner the person considers tolerable.”  The Panel goes on to remind us that suffering “can take a variety of forms (physical, mental, emotional, social, spiritual or existential),” meaning that a person need not be experiencing any physical pain to access euthanasia or assisted suicide.What’s more, the Panel explicitly rejected the proposal from the Joint Select Committee that the terms ‘grievous’ or ‘irremediable’ be included in relation to the description of the suffering, because it considered this could “lead to a possible interpretation that there should be an objective determination of the nature of the suffering.”

The Panel recommended that in order to be eligible for euthanasia or assisted suicide, it needed to be “reasonably foreseeable” that a person would die within 12 months.  This is twice as long as the Victorian requirement of six months, and rejects the submission from the AMA (WA) on prognosis and treatment options.  The AMA (WA) said:

“Death must be imminent within 6 months, as the outcome of the medical condition.  Further, all measures must have been exhausted to remediate the person’s suffering.”

8. The requirement of being resident in WA for 12 months can be dispensed with on “compassionate” grounds

Victoria’s legislation requires that a person be ‘ordinarily resident’ in Victoria for 12 months before accessing euthanasia or assisted suicide, to prevent “death tourism.”  The Panel notionally accepts this, but also opens up an avenue for a person to apply to the State Administrative Tribunal for relief from this, “in exceptional circumstances, on compassionate grounds.”

Given that euthanasia and assisted suicide is sold to the public as something that will only occur “in exceptional circumstances, on compassionate grounds,” then it is difficult to see how inserting a loophole will not simply pave the way for anyone to end their life in WA.

9. Generally, the process from first request to drug being taken could be as short as nine days, and just one day in certain circumstances

The time period imposed by the Panel’s recommendations would mean that generally speaking, a person would need to wait nine days between making their first request for euthanasia and receiving the lethal drugs.  However, this period can be shortened to just one day if the medical professionals believe death is likely to occur sooner or the person may lose decision-making capacity.

10. The right of doctors and health care facilities to object is unclear

It seems that a health practitioner or service that, in line with the view of the Australian Medical Association and the World Medical Association, believe that medical practitioners should not be involved in euthanasia or assisted suicide, would still be required to give them information about how to access it.

The West Australian Ministerial Expert Panel Report is demonstrating how safeguards against euthanasia and assisted suicide are not only weakened within the same state, but across the country.  WA has already indicated its recommendation to broaden the scope of euthanasia laws that were introduced in Victoria.  This is a dangerous sign not only for WA, but for the rest of the country.