An empty chair, a missing Premier - a poignant metaphor 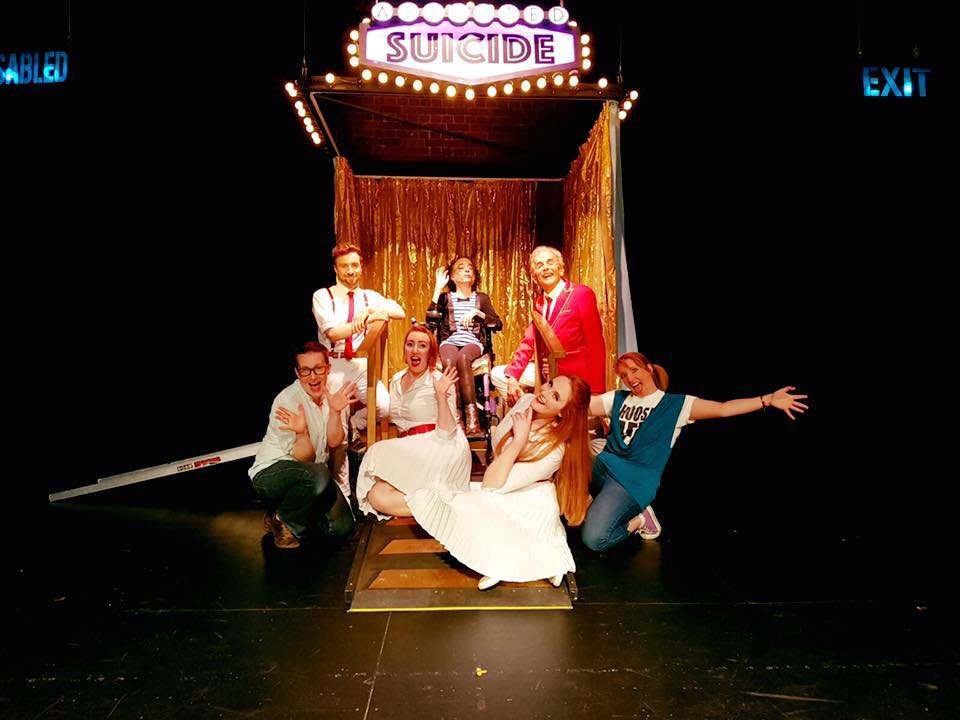 British Actress, Comedian, broadcaster, Liz Carr, known internationally for her work opposing assisted suicide as a disability campaigner as well as her role in the BBC forensics drama, Silent Witness, has been in Melbourne, Australia for the last few weeks with her show: Assisted Suicide: The Musical.

Part of the Melbourne International Comedy Festival, Liz's show is incredibly funny as it is poignant. Simply put; it is a great night out designed to make people think about the issue of assisted suicide. Pegged by Liz as a 'Ted Talk with show tunes' the show is a rollicking feast of songs in the great tradition of show tunes interspersed with Liz talking to the audience about her experiences and concerns about assisted suicide.

"For me, the lasting impression was of how reasonable Liz's arguments are. There's no dogmatic, in-your-face demand to accept any specific position. Yes, there's plenty of confrontation and strong languageâ€¦ but it's not directed against anything except entrenched, predominantly-emotional stances that simply won't stand up to rational examination. And she covers just about every imaginable angle. The overwhelming take-out from this 90-minute entertainment is just how ill-considered and irrational most of the pro-suicide arguments really are, and how rational and reasonable the alternatives are. It's about LIFE, not death. And it's about showing better solutions for LIVING with dignity.

"She also skewers popular pro-suicide buzzwords like "choice", "dying with dignity", "mercy killing", etc and presents a cogent case for people with disabilities, against a clever tapestry of the stark realities experienced in countries and states around the world where assisted suicide is already legal. It's a sobering wake-up call, delivered with clinical precision, couched in terms that can only be considered rational and lucid â€” yet disarmingly kind and intensely human." 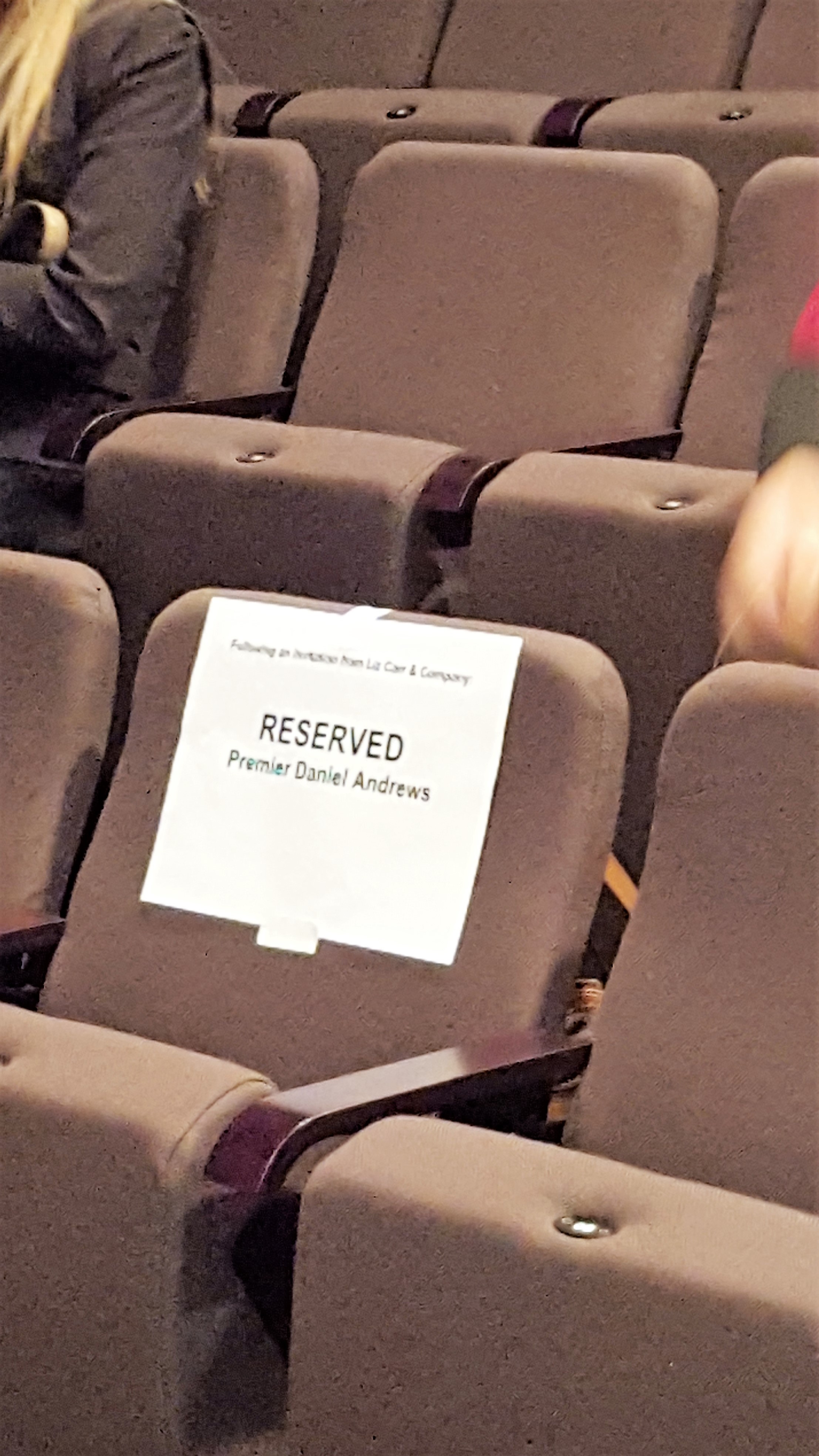 Each night in the auditorium a lonely, empty chair faces Liz and the cast during each performance. A sign on the chair reads:

The chair has remained empty.

A cynic might conclude that the empty chair and the sign itself are something of a 'trick-of-the-trade'; a vaudevillian artifice to add some extra dimension to the performance. To know Liz Carr would be to instantly dismiss such accusations. After all, the show is all about bringing information and experience to the debate which includes all politicians and certainly the Premier of Victoria. As Western Australian disability advocate, Sam Connor told the South Australian Parliament last year, 'We don't have loud voices; we don't have unlimited funds; we don't have glossy campaigns; we don't have articulate public figures...and that's why you need to listen harder because we are the people that are going to die as a result of this legislation.' That is one reason why Liz Carr's show is so important and why behaving like the proverbial ostrich is both disrespectful an dangerous.

Other Members of Parliament have seen the show and others also joined with their colleagues to hear Liz give a briefing in Parliament before the show commenced. Not all will have had an open mind on the subject, certainly; but to their credit they heard Liz out. And if informed consent is to be the hallmark of access to assisted suicide legislation, then surely giving up 90 minutes one evening to become informed about the issues that many in the disability community hold in this matter isn't too much to ask? As Liz told Victorian MPs recently:

"Opposition to these bills is usually marginalised as being religious and that's very useful to do if you don't want to listen to it, but actually if we want to introduce a bill like this, we have to listen to all sides of course, and we have to not diminish their view."

"I have met with disabled people all over the world in this issue. Why does it involve us? Because it's very easy to shut up disabled people, and go this is not about you. This is about terminally ill people. In the public perception, in the media, and in medical terms there is such a fine line between disability and terminal illness, that we become one in the same."

Nor is Liz's attempt to engage Premier Andrews about trying to embarrass him into coming. Liz has contacted the Premier's office with an invitation; she has invited him again and again on social media, on national television and in the pages of the local newspapers. This is about genuine and necessary engagement with the issues; about an informed decision.

Readers will instantly understand that the Premier is an important figure in such debates having the 'yeah or nay' on what is debated in the parliament and what debate time is allocated. Moreso for Daniel Andrews in this instance because the move towards an assisted suicide bill expected to be introduced later this year was his call, with his endorsement and his support.

How can any polity make such grave decisions about life and death without hearing the concerns of communities who have skin in the game? A 'head-in-the-sand' attitude or a claim to be 'too busy' or worse, apathy or prejudice further marginalises those whose life experience is often precisely about marginalisation, discrimination, lack of opportunity and not being listened to. Again, as Liz observes:

"Legislation is therefore unsafe already, because not everybody already starts out as having equal value under the law or in the medical profession or in public perception. I remember Stella Young talking about this a lot: can we have death with dignity, until we have dignity in life?"

In Australia where every major infrastructure project requires an extensive (and expensive) environmental impact study that underpins development with assurances that our flora and fauna, waterways etc. are protected from harm, isn't it only reasonable that any threat to human life and flourishing be treated with equal or greater weight? Isn't it just and proper that we consider the risk; any risk of wrongful death a bridge-too-far just as we did when we banned capital punishment?

Legislation is always about winners and losers; about those who benefit and those who might be disadvantaged; but rarely is the disadvantage so severe as to be about life itself.

And so the empty chair remains as a powerful and poignant metaphor. Not good enough Mr. Andrews! Go looking for the 'small voices' and not simply the squeakiest of wheels. That's a different story and one that must be heard.