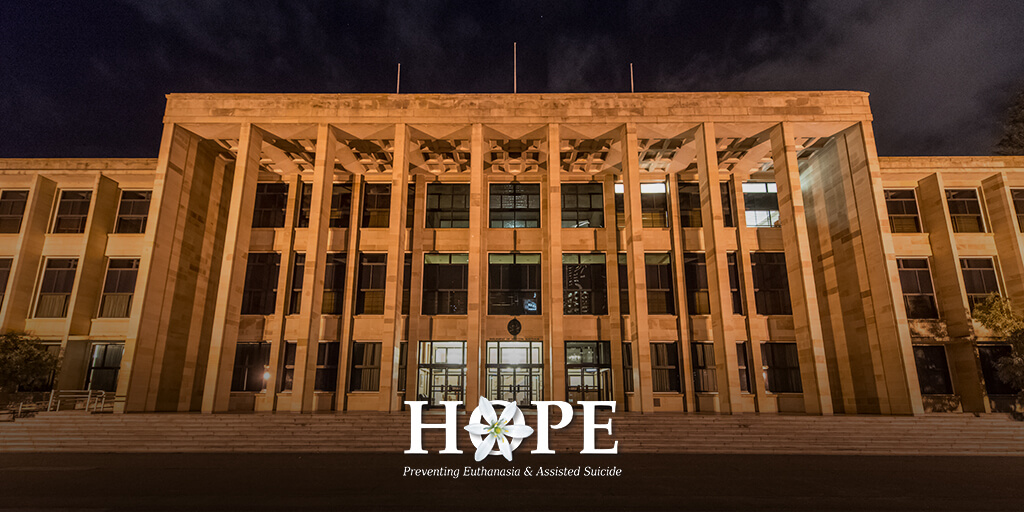 An important message from 150 Western Australian medical practitioners to the WA parliament.

150 Oncologists, palliative care specialists, professors of medicine, general practitioners, specialists, associate professors, former AMA presidents and a long-standing former dean of the medical school in Perth, have put their name to a petition, calling on the WA parliament to reject the Voluntary Assisted Dying Bill 2019.

These experts, 20 of whom have worked in regional WA, argue that this radical bill will put the lives and wellbeing of many Western Australian unnecessarily at risk.

The stakes could not be higher.

Dear Members of the Parliament of Western Australia

We the undersigned medical practitioners of Western Australia urge you to vote against the passage of any bill that would legalise assisted suicide and euthanasia, which are sometimes referred to as “voluntary assisted dying”.

We do not believe that such legislation is needed in Western Australia and that it would be a regressive not a progressive change, putting the lives and wellbeing of many Western Australians unnecessarily at risk.

Assisting our patients to commit suicide or intentionally killing them by euthanasia is never acceptable. It is not and can never be regarded as medical treatment or medical care.

Euthanasia, that is the act of deliberately ending the life of a patient, even at the patient’s own request or at the request of close relatives, is unethical. Physician-assisted suicide, like euthanasia, is unethical and must be condemned by the medical profession. Where the assistance of the physician is intentionally and deliberately directed at enabling an individual to end his or her own life, the physician acts unethically. Physicians [should] refrain from participating in euthanasia, even if national law allows it.

101 Victorian oncologists signed a letter in September 2017 opposing the legalisation of euthanasia and assisted suicide in that state.

With rising suicide rates in Western Australia, we believe that changing the law to permit physicians to assist suicide will wrongly divide Western Australians into two classes - those whose suicides we seek to prevent and those whose suicides we approve and facilitate. As the profession in society tasked with preserving life and using our skills to optimise care to those afflicted by illness, we believe that assisting an individual to take his or her own life for any reason is never warranted and is never an appropriate solution to their illness.

We respect an individual’s right in the community, but autonomy is not an absolute right. It must be balanced against the risks to the community as a whole, especially the vulnerable.

We are greatly concerned that the legalisation of assisted suicide and euthanasia would place unspoken pressures on vulnerable populations in our community such as the elderly, the disabled and the depressed. These Western Australians have a right to an expectation of care - not an option of care. We are very concerned about legislation over time changing societal values and attitudes towards disadvantaged groups in our community. No number of alleged safeguards can ever guarantee that there are no wrongful deaths from assisted suicide and euthanasia, including the deaths of those who are either overtly or subtly pressured into feeling a burden on others such that they would be better off dead.

Those at risk of wrongful death need and deserve our society’s care and protection, so that their individual rights are not abused.

Given the historic and current abuses that have led to royal commissions into the care of the elderly and into the abuse of those with a disability, how can we consider introducing a new, lethal way of potentially abusing these and other vulnerable groups in our society?

Once introduced, however initially restricted, there is a tendency for the access criteria for assisted suicide and euthanasia to expand. In some jurisdictions those with dementia or mental illness, as well as children are now eligible. Involuntary euthanasia also occurs. (See the documentary Fatal Flaws for real-life examples.)

We urge you not to be unduly swayed by anecdotal reports of difficult deaths, often from decades ago. Advances in palliative medicine have been and continue to be significant. Western Australians can and should have confidence that, palliative care can support them and provide holistic care to the individual and their families, in experiencing a peaceful death.

What is needed is the urgent correction of funding deficits in the provision of specialist palliative care and support services for those who are approaching their end of life. This applies throughout Western Australia but especially in regional and remote areas, including indigenous communities. Addressing these significant service gaps, including increasing the workforce and providing carer support services and hospital and community-based palliative care, will be far more helpful for all Western Australians at the end of life compared with the legalisation of assisted suicide and euthanasia.

We urge you to carefully consider our concerns as physicians at the coalface of health care in Western Australia and to exercise your vote responsibly by rejecting such a fundamental change to the law for the good of the whole community, especially the most vulnerable.

Signed: by the below-listed signatories who support this statement as individual health professionals and not as representatives of any hospital or other organisation with which they are associated.