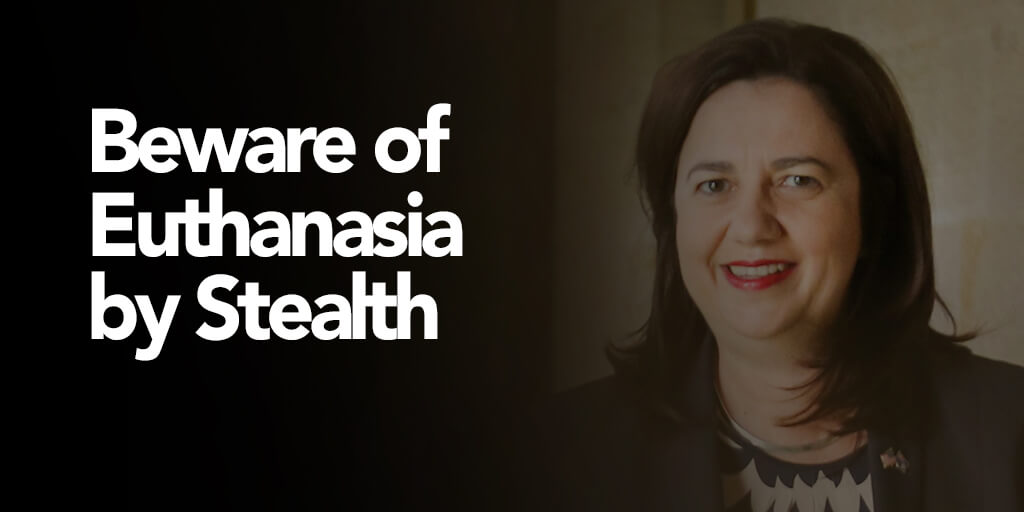 At the November 2017 election, the Queensland government told voters it had “no plans to introduce legislation to allow for voluntary euthanasia”.

“The Palaszczuk Government has no plans to introduce legislation to allow for voluntary euthanasia and will continue to closely monitor developments in other jurisdictions. This was our commitment to interested stakeholders ahead of the November 2017 election”

And yet despite these commitments, only a year later, the Queensland government launched an ‘Inquiry into aged care, end-of-life and palliative care and voluntary assisted dying’.

And this week Queenslanders were greeted by the headline: “Labor members push Palaszczuk Government to introduce euthanasia laws before 2020 State Election.”

As their window of opportunity shrinks, party members are seeking to ram through euthanasia laws while they still can.

With their state election looming large, their plan is to move a motion from the floor at this weekend’s Queensland Labor conference to force the Premier’s hand on the issue.

This comes after several cross-factional regional member assemblies held ahead of the conference passed Left faction motions calling for the reform to be brought in during the current term as a matter of urgency “to prevent ongoing and unnecessary suffering”.

Their end goal: to force the Palaszczuk Government to bring in laws to legalise assisted suicide before the state goes to the ballot box next year.

These party members know that if debate is delayed until after the State Election and Labor either loses or fails to keep its majority on the floor of the House, their chance to legalise death on demand in the Sunshine State is gone.

And who knows how long it may be before it resurfaces?

Last year the same faction circulated a motion ahead of their party’s state conference, calling for an inquiry before the end of the year and for the party to:

“affirm its belief that voluntary euthanasia and assisted dying, in addition to comprehensive palliative care options, should be legally available as an option for a person of sound mind suffering from a terminal illness that has diminished their quality of life to the extent that the person requests termination of their life.”

History now attests they got their inquiry; it went ahead in record time.

You and I can only hope the same stunt doesn’t work as well this year.

But not only have they friends in high places, they have wealthy backers…

The Clem Jones Trust has banded together with pro-euthanasia group Dying With Dignity and Everald Compton’s National Seniors Australia movement to liaise with Go Gentle Australia, the organisation which drove the Victorian euthanasia campaign.

Chairman of The Clem Jones Trust, David Muir, renewed his call for parliament to consider euthanasia laws this term.

“The motions are a matter for the Labor Party conference, but we agree with the sentiment of needing to act in this term.”

Time will tell whether these tactics succeed at this weekend’s Queensland Labor conference.