Boycott Me Before You

Opening in June in Australia, the Hollywood movie Me Before You should be shunned, avoided and condemned.

Me Before You is a story about a rich young banker who becomes a quadriplegic. He is carered for by a young woman engaged by his family to keep him from taking his own life. They develop a love relationship, but that is not enough and he eventually heads of to Dignitas to suicide. 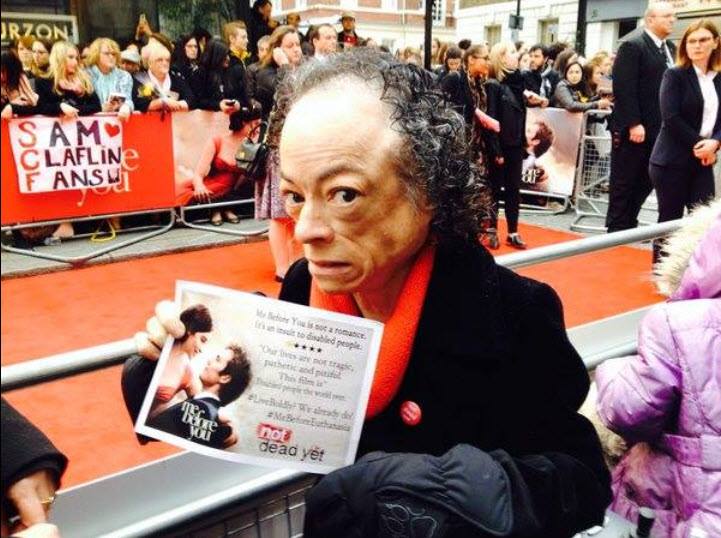 Critics in the disability community have called it a 'disability snuff movie'. It's portrayal of disability centres around pity. The male character's desire for death, understandable and accepted.

US disability activist at Not Dead Yet USA, John Kelly said that, 'Me Before You is little more than a disability snuff movie, giving audiences the message that if you're a disabled person, you're better off dead.'

Little wonder that UK disability activists, including actress and comedian, Liz Carr, recently protested at the opening of the film in London (pictured).

Blogger 'Crippled Scholar' comments on the book on which the film is based:

"The main source of rationalization for why he should want to die actually comes from other people who are usually (with one exception of a guy on a message board) not disabled themselves going on about how if "they were like that, they'd want to die too". even Nathan, Will's care aide says it.

"Louisa (because let's be clear this book is about her, not Will) is constantly confronted by people who reinforce the idea that it is better to be dead than disabled."

US academic and disability activist, Bill Peace, who blogs under the title of 'Bad Cripple' put it this way:

'The representation of men with a high level spinal cord injury is a worn out trope. Death is preferable to life as a high

level quad. The higher the level of injury the more likely a character is cheered to his death. Paraplegics can zip around in sporty wheelchairs, play sports, participate in the Paralympics but we remain tortured souls but rarely are we the inspirational figures for death. This domain is reserved for quadriplegics. Think Million Dollar Baby, Whose Life is it Anyway, Sea Inside, The Switch, etc. Variations on this theme exist but its a good bet if an actor is portraying a quadriplegic the characters is almost certainly going to die. The death in most cases is the highlight of the film. Me Before You is simply the latest film that sends a simplistic message that typical people seem drawn to like a moth to a flame.'

He predicts that the film will be used by pro-euthanasia organisations to promote their cause: 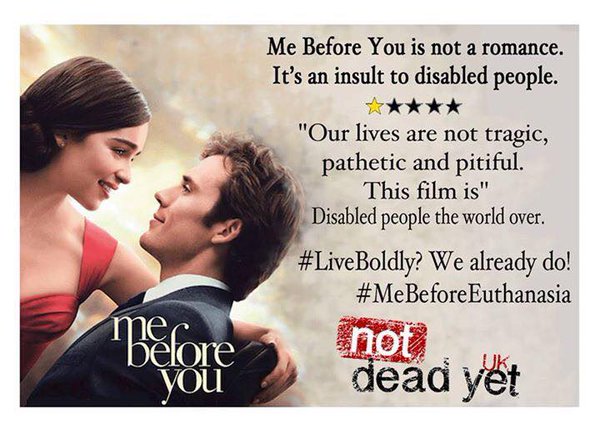 'Predictably, there are more than a few angry people with a disability who deeply object to the book and film. If the film is a hit, and I believe it will be, there is no doubt organizations such as Compassion and Choices will exploit its popularity to help pass assisted suicide legislation.'

And there's the irony. Lauded in the film world and, no doubt by an anaware and unthinking public at large, it serves to re-enforce the dangerous meme that death is better than disability.

The twitter campaign against the film and even some traditional media outlets have recognised some of the deep problems in this film. The hashtag #mebeforeeuthanasia says it all.