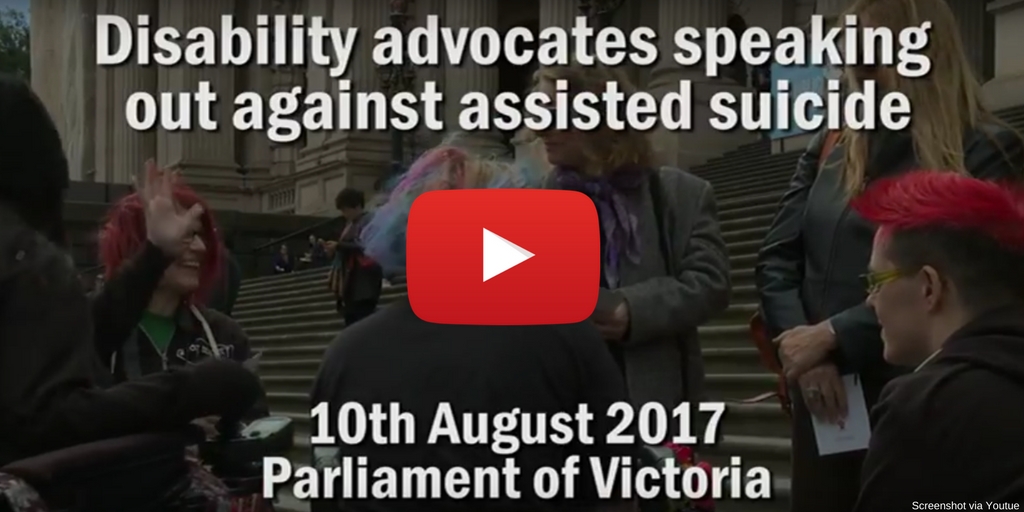 Local and National Disability Advocates spoke out recently against the Andrews Government’s proposed assisted suicide and euthanasia bill at a Parliamentary Briefing.

The day began with a game of ‘Cards Against Humanity – assisted suicide version’ on the steps of Parliament House.

Once inside parliament, the testimonies were heard:

“Disability and assisted suicide is incredibly inappropriate when put together.

…we think the whole idea is actually really rude and inappropriate. It's being marketed as something that's about death with dignity, and the idea of dignity is really problematic for us because a lot of us don't go to the toilet in the same way that other people do and it's not something about us being less dignified.”

“Those issues around the narrative that our lives are tragedies is a really, really big issue for us and they're the things that I don't think non-disabled people know.”

“Currently we define (being a burden) based on fear and based on fear of the other, or fear of becoming disabled and what that would actually mean. And it's not actually often a lived experience of that person. It's based on this fear and these cultural narratives and representations of disability as a terrible tragedy, of disability as a burden of disability being better off dead than being disabled. And for me all those things play into our mental health, how we feel about ourselves; the access to services and supports that we might or might not have.”

“Please consider your decision from all angles and all perspectives, you have the power to decide whether people live or die. Please don't take that lightly. And it isn't only people with cancer who cannot access treatment and services, people with disability don't always have the same access to preventative health services as everyone else, a lot of the time this is because of lack of access.”

“So what I'm asking is that before you take steps to make sure that people can die with dignity, as we hear so often, that you first make sure that everyone has the same opportunity to access health services and live a life free from discrimination, whether that be systemic, attitudinal, or environmental.”

Note: The anonymous testimony discussed by Kelly can also be found HERE

“Why it's all abled people and bipeds talking about how they saw their grandma die and it was really sad or they don't want to be disabled because that would suck and they'd prefer to kill themselves.

“We get told all the time by total strangers on the street, "Oh you're so brave, I'd kill myself if I were you." And that's really depressing.”

“Coercion is not about being dragged to your death. Coercion is worse than that usually. It's usually social coercion, and it looks in the form of you decide yourself, because life's so poor, but that's not always physical or mental. It can often be because you've not got the support you need or because you're with a family that you don't want to burden.”