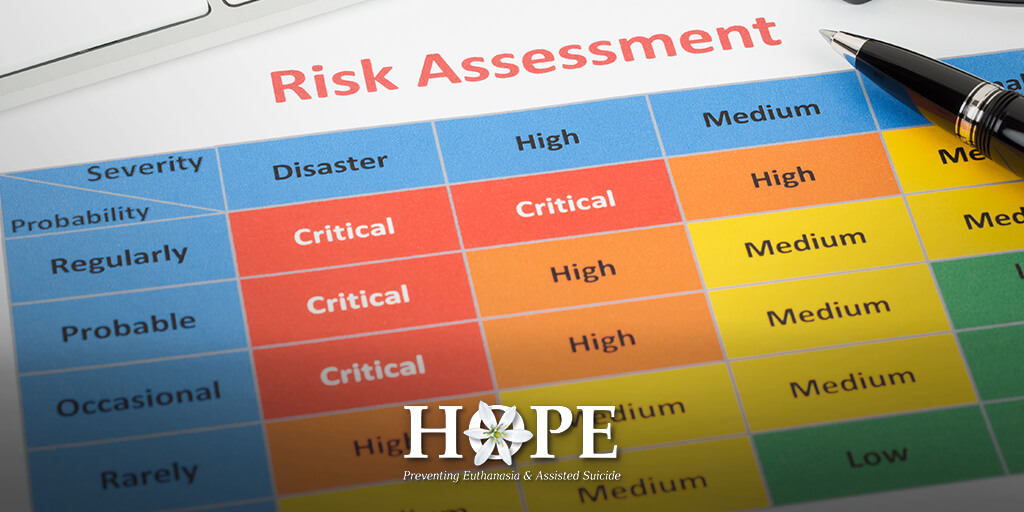 A new, scathing report on the risks of assisted suicide laws to people with disabilities has been released by the National Council on Disability (NCD) in the United States.

Amongst the most alarming findings contained in the report, the NCD found that while “assisted suicide laws contain provisions intended to safeguard patients from problems or abuse,” research showed the provisions to be ineffective, often failing to protect patients.

Alternative treatment options either not available, or actively denied

The report states that the Oregon assisted suicide model “assumes that if an eligible patient doesn’t want assisted suicide, they can receive medical treatment,” but the evidence demonstrated that patients with disabilities were being denied insurance coverage and offered assisted suicide instead.

The denial of treatment, the report said, was in line with an Oregon Medicaid rule that “denies surgery, radiotherapy, and chemotherapy for patients with less than a 5 percent expectation of 5-year survival.”

So, while assisted suicide is supposed to be limited to terminal patients with less than 6 months to live, a person is not required to be given treatment if a survival threshold is met and that individual is expected to have less than 5 years to live.

The report goes on to say that while some supposed safeguards require that a patient be informed of alternative care options, there is no requirement that these are actually made available.  “Many people with disabilities find this to be a very shallow promise when they know that all too often the programs are too few, the resources are too limited, and the options… often non-existent,” the report says.

No safeguards against internalised oppression of those with disabilities

The report also found that safeguards are not able to deal with the “internalised oppression” of people with disabilities.  The report states:

“For some people with disabilities, demoralization or depression may be caused by the long-term struggle against socially constructed obstacles to one’s life goals, social devaluation of disability, social isolation, financial concerns, and lack of support to make life meaningful. Further, feeling like a burden is a potent risk factor for demoralization... the tendency to equate disability with burdensomeness is pervasive in our society, placing people with disabilities and seriously ill people at substantial risk of demoralization.”

It went on to say that doctors “don’t know how to recognize and intervene when patients experience disability-related demoralization.”

The report highlights how the limited data reported in assisted suicide cases can be skewed by those tasked with providing the reports.

For example, the annual reports released by the Oregon Health Authority are based on information provided by the physicians who prescribe the lethal doses, and there is no ability for family members, other healthcare professionals or members of the public to report suspected abuses.

The Oregon Health Authority itself admits that it is difficult to assess noncompliance with safeguards “because of possible repercussions for noncompliant physicians reporting to the division.”

It doesn’t take a rocket scientist to predict that a doctor is not going to report their own noncompliance with legislative safeguards if doing so would subject them to potential penalties.

Alarmingly, the report also found that there is no mechanism for anyone other than the prescribing physician to make reports of noncompliance.  It quotes the Oregon Department of Health and Human Services as saying:

No wonder Oregon is held up by assisted suicide advocates as an example of a jurisdiction where there are no abuses of the law.  It doesn’t provide mechanisms for those abuses to be reported!

The latest report from the NCD confirms what we already know: that legislative safeguards, however well-intentioned, cannot protect our most vulnerable from being pressured into assisted suicide or euthanasia.  And our most vulnerable deserve better than that.