This last week I changed my profile picture on my social media accounts for the first time. A seemingly common reaction to world events these days, I have never before been motivated to do so. Not that I have not grieved over horrible events such as the Charlie Hebdo massacre, the terrorist attacks in Paris or Nice or any of the other atrocities that seem sadly to be all too common these days. I have.

But on July 26, 19 intellectually disabled men and women were executed as they slept in a pre-dawn attack upon a care facility in Sagamirihara, Japan. Aged from 19 to 70 years, there were also 26 others who were injured in the attack.

The media characterised the attacks as 'senseless' and 'incomprehensible'. At one level, this attack on innocent defenceless people by a lone madman is, indeed, 'incomprehensible'. But for my many friends in the disability community it is, perhaps, an extreme and example of the kind of prejudice that they experience all too often; a chilling and visceral reminder of the subtle and not so subtle discrimination that is never far from them and that echoes through history.

The killer was clearly deranged. But to dismiss the reasons he gave for what he did on that basis would be an implicit endorsement of his actions, silence is consent, compounding the grief. In a letter the killer sent to the Japanese Parliament some time before his henious actions he wrote:

"I envision a world where a person with multiple disabilities can be euthanized, with an agreement from the guardians, when it is difficult for the person to carry out household and social activities.

"I believe there is still no answer about the way of life for individuals with multiple disabilities. The disabled can only create misery."

He also cited an economic benefit to the destruction of disabled people and went on to describe precisely how he would go about his crimes.

"This hate crime and mass murder led to a sleepless night for me. What took place could have happened in any nation. It could have taken place in Omaha, Nebraska, Cambridge, England, Paris, France, or Syracuse, NY. As I read story after story I felt a chill go down my spine, diffuse at T-3 when I read the following words: 'He was just an ordinary young fellow.' 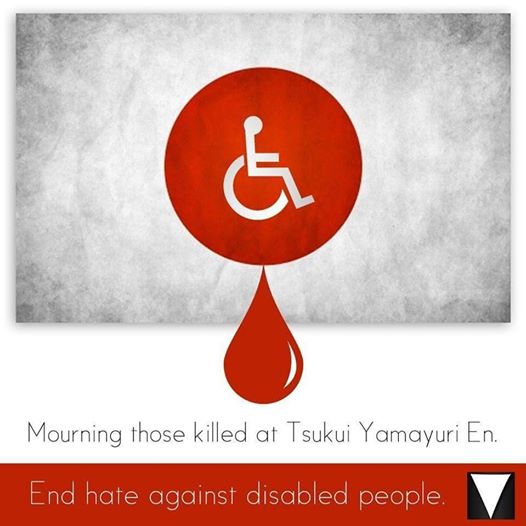 "I have no doubt he was an ordinary young fellow. That is what makes ableism so frightening. People, typical people, think life with a disability is worse than death. I plan to go out to lunch with my son, We will likely stop at a cross walk and wait for a light to turn. A biped will likely stand near me. That biped might be thinking "shit, if I were paralysed I would prefer to be dead. That guy should be dead. He sucks up too much health care dollars". This is what scares me. The silence. How many silently wish we people with a disability did not exist. My concerns are shared by many who have a disability and more generally any person with an atypical body."

Canadian blogger and disability activist, Dave Hingsburger touched on what I know many disabled people will also have thought. Thoughts based on experience, thoughts that twist the gut with dread:

"The discussion of and public endorsement of the concept of mercy killing of people with disabilities had taken root in this man with alarming ferocity. No doubt he will be spoken of as someone who has mental health issues, and maybe he does, but when you read what he says, what he says isn't far from what most people have come to believe. His statement to the police upon turning himself in that 'it's better that disabled people disappear' isn't a deranged rant by someone out of control, it's a calm statement of fact that echoes the sentiment of many in society. People with disabilities know this sentiment, we hear it, we experience it and we have come to fear what it will do. Our lives are devalued, are needs seen as special and therefore burdensome, our rights are declared to be gifts rather than guarantees."

Peace calls out the killing as a 'hate crime' and broadens the context:

"The hate crime in Japan graphically and horrifically demonstrates that people with a disability are prone to being the victims of violence. That violence includes murder. How many more people need to die before ableism is acknowledged as a global problem. The violence I refer to takes many forms. Hollywood knows films that kill disabled characters for their own merciful fend of life resonates well with audiences. Police in the United States have killed a host of people with a disability. Parents who murder their disabled children are given light sentences for their crimes. Donald Trump openly mocked a disabled reporter from the New York Times. Most recently the video of a man trying to help an autistic client of his was shot. The police bemoaned the fact they missed the man with autism. They tried to kill him. Yes, their intent was to kill a man from a group home with autism that was playing with a toy truck. This sort of violence is spun in a myriad of ways. It also appears as if the massacre in Japan has lost the media's attention. There is no live coverage on CNN."

The story quickly fell off news websites. Only one journalist to my knowledge, Yuichi Sakaguchi, senior staff writer at the Nikkei Asian Review made the hate crime connection. Little wonder that Hingsburger should ask: Why isn't it a hate crime?

'I think the answer goes deeper than 'they don't get it.' I think it's because, maybe a little, people see the logic of what he's done.

And that scares the hell out of me.'

These fears are real; they are held by close and trusted friends and my own family.

And that's why people like Australian journalist and euthanasia enthusiast Andrew Denton's patronising dismissal of Joan Hume's concerns about euthanasia and disability on the ABC program Q and A a few months ago has angered many in the disability community.

You see, Denton visited places like Belgium, Holland and Oregon, where euthanasia and or assisted suicide is practiced under legal cover, and asked those who run peak bodies for disabled people and senior citizens if they knew of any abuses. He found none. I have been to Belgium and Holland too and I found the opposite. So, I guess we did not talk to the same people.

But here's the rub: the fears that come from hard experience don't really appear in empirical studies. These things are hard to measure. In terms of euthanasia and assisted suicide, there are plenty of anecdotes and assumptions that can be drawn from any number of cases that point to the reality that such discrimination and abuse does exist. A quiet word; an attitude; a suggestion; an expectation; a sense of burden; an assumption that life with disability is not a worthy life. It is only common sense to observe that such abuses defy empirical scrutiny. 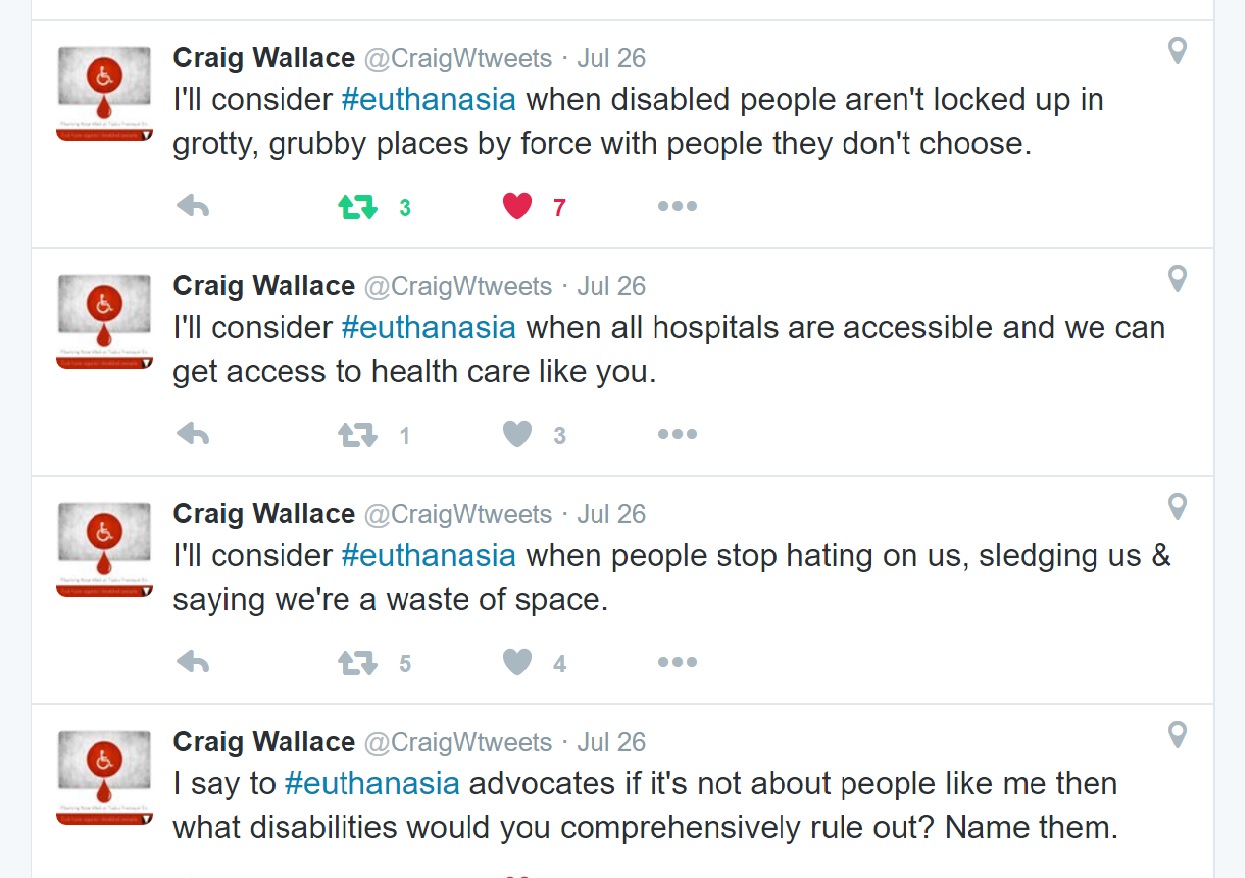 We can't test everything that matters to us by studies and surveys. Sometimes we simply have to rely on the depth of sentiment held by those who feel the pain; who sense the risks. We accept those standards in so many other areas of social policy on discrimination but, somehow, when people living with disability raise their voices against euthanasia in similar terms they're told patronisingly that its not about them. But what is a terminal illness if not an acquired disability?

Such responses display precisely the same sort of ableism evident in the words of the Japanese killer. Ableism is defined as a set of practices and beliefs that assign inferior value (worth) to people who have developmental, emotional, physical or psychiatric disabilities. That some people are willing to decide for people with disability that their deep seated concerns are misguided and therefore not to be factored in to public policy settings fits that description.

Not that all people with disabilities have had such negative experiences of ableist discrimination that instinctively creates deep reservations about euthanasia and assisted suicide; but many do. Craig Wallace, former President of People With Disabilities Australia is one such articulate voice. Craig tweeted frequently and noted the lack of outrage at the Japanese hate crime:

"Oh and I'll consider euthanasia when people change their Facebook profiles to mourn the disabled victims. Why aren't they?"