Beware: doctors cannot tell when a patient will die

In any profession, mistakes will be made – it’s human nature. However, when doctors estimate patients’ life expectancy, mistakes treated as truth can have grave consequences. For some, there is no “live and learn”.

When it comes to doctors informing patients of their life expectancy, it is critical to never take doctors estimates as definite – because doctors cannot accurately assess when a patient is going to die.

A recent study revealed that doctors’ assessments for when a person will die are almost assuredly wrong. As reported:

More than half the patients whom doctors thought would die within a year lived longer, according to an overview of predictions. In a third of cases, doctors failed to spot that patients were in their final months.

Doctors were using “stone age” methods to pick out those patients who might need extra help at the end of their lives, risking overburdening palliative care services with the relatively well while denying treatment to those who need it, researchers concluded. More scientific methods of predicting who was nearing the end of life were needed to end reliance on faulty medical intuition, experts said.

GPs, nursing homes and some hospitals often use a simple screening question to pick up which of their patients with long-term conditions such as heart failure or cancer are likely to need palliative care, asking themselves: “Would you be surprised if this patient died within the next 12 months?”

This arbitrary “information” is oftentimes used to determine access to euthanasia or assisted suicide. When people believe their lives are getting near “the end,” they may then become more likely to seek means of ending their life – all based on guesswork:

Paddy Stone of University College London, who led the study, said this was not used in discussions with patients — “you wouldn’t say, ‘I wouldn’t be surprised if you were dead within a year’ ” — but in an attempt to trigger extra help for those who needed it without committing to specific predictions of weeks or months.

“The ‘surprise question’ plays a role in encouraging them to identify those of their patients who may benefit from palliative or end of life care, without the need for a precise survival prediction,” he said. “Doctors often feel like they’re making a self-fulfilling prophecy if they are asked to give a specific prognosis, but if they’re just asked this gentle question it makes it easier.”

He looked at 25,718 times doctors and nurses had answered the question across 22 studies, finding overall they were 75 per cent accurate. However, much of this was driven by successfully predicting that patients who were unlikely to die would not do so.

When doctors said they would not be surprised if someone were dead within a year, the patient lived longer in 54 per cent of cases. They were also surprised by 1,238 of the 4,217 deaths in the study, published in the journal BMC Medicine.

“It’s not bad but we think we ought to be able to do better,” Professor Stone said. He added that patients wrongly identified as in the last year of life should not be alarmed, as this simply meant doctors would have a discussion with them about their wishes,[emphasis added] which was likely to be helpful at some point.

If doctors’ assessments about a patient’s lives are so prone to being “off,” why would we base euthanasia and assisted suicide legislation on this error-prone assessment? Such legislation is not just irresponsible – it flippantly plays with citizens’ lives:

Bill Noble, medical director of the charity Marie Curie, said: “An accurate prognosis concerning the length of a terminal illness can be a really difficult thing for clinicians to get right, even for people in the advanced stages. While we may be able to improve the accuracy of predictions, these will ultimately always be expressed in terms of risk of death within a particular time frame. No two people are the same.” 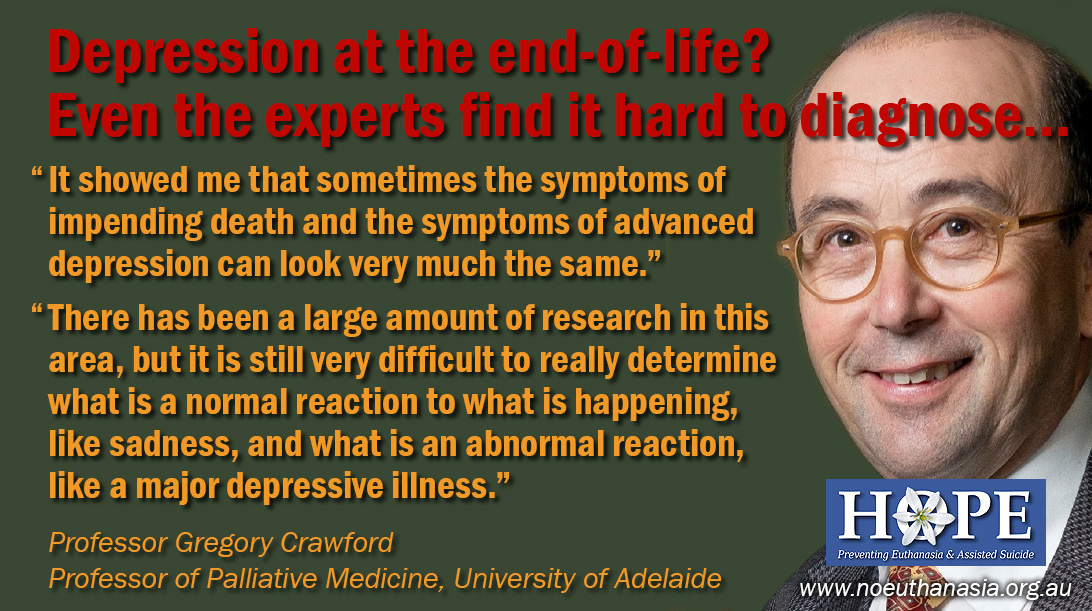 This isn’t the first time medical professionals and research have verified that end-of-life assessments for terminal illnesses are error-prone. Professor Gregory Crawford has warned us before about such mistaken diagnoses:

… I looked after a 15-year-old girl who had a malignancy who looked like she was dying. I was working as the clinical head of palliative care at a hospital in Adelaide, and she was referred to us on the basis that she only had weeks to live. She had difficult pain to manage and other symptoms that led to her becoming more and more withdrawn.

I was slow to recognise that she was depressed and I found it hard to find advice and support about to manage it. I looked in the literature and talked to psychiatrists and other colleagues. I ended up changing her antidepressants and she made a miraculous improvement, both physically and psychologically. She improved and lived for another 12 months. She had serious, progressive disease but her physical function and her ability to interact and live improved. She went off on a holiday, achieved some other things on her wish list and made lots of other nice memories for her family.

The implications of not diagnosing are that patients have increasing suffering and may not be getting the best treatment. They may be losing an opportunity to have more time or meaningful interaction with people around them. For their families, this can be a very large trauma; to not understand why somebody has turned their back on them or why they might be rejecting relationships, being overwhelmingly sad, or wanting to die precipitously. When triggered by depression, those responses can be quite challenging.

Legally allowing people to both kill themselves and others based on this shaky, error-prone information isn’t just irresponsible – it is morally wrong. Australians deserve better than euthanasia and assisted suicide, and we can ALL live without it.