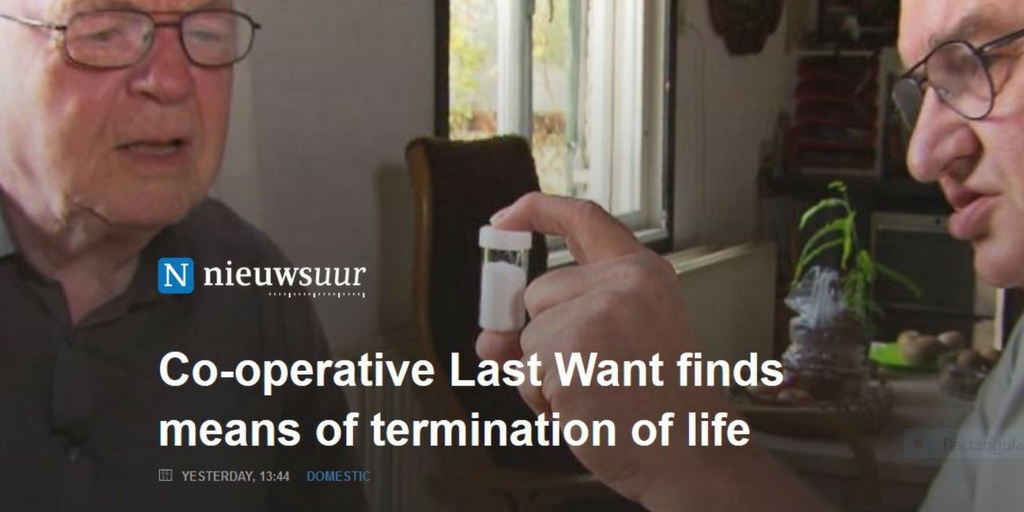 In recent years the discussion about ‘life ending actions’ has turned to assisted suicide for ‘completed life’; where a person over a certain age may declare that they wish to end their lives even though they may have no presenting, serious medical issues.

Debate has raged back and forth on this new development for some years. An expert committee recommended that changes to the law not proceed, but there remains support from within government and some of the minor parties.

Reports in 2016 suggested that the government had drafted legislation. Health Minister, Edith Schippers, has said that "because the wish for a self-chosen end of life primarily occurs in the elderly, the new system will be limited to them”. The lower age limit is rather arbitrary with debate ranging from 60 to 70 years of age.

Legislation is expected to be introduced in late 2017. It is expected to take the form of a new law rather than an amendment. This seems to be because the existing provisions require medical opinion and support whereas this new form of assisted suicide may have more in common with the Exit/Nitschke mail or online order system.

But this is not the first time that such a move has been put forward. As with all of these debates, there’s a long lead-in time while the discussion of the agenda looks to forge a beachhead of public opinion.

In 1991, Dutch Supreme Court Judge, Huib Drion, argued for “The self-chosen end for old people,” over the age of 75. He suggested a two-stage process where a person would self-administer a substance that would have no immediate effect that could be followed up later by the second stage substance that would react with the first and bring about death by suicide. The idea became known as ‘the Drion Pill’ though no such pill was ever developed.

The publication of his paper in NRC Handelsblad in 1991, sparked a significant controversy with letters of support flowing to the newspaper for many weeks and Drion receiving a great deal of public attention.

The World Federation of Right to Die Societies (WFRTDS) also picked up on the idea as did its Dutch counterpart the Dutch Right to Die society (NVVL) and the former Dutch health minister Els Borst who was instrumental in the introduction of the 2002 euthanasia law.

In 2003, the WFRTDS adopted a name change to their policy support for Drion’s idea, calling it, instead, ‘The Last Will Pill’ and noting that the resonance of the use of Drion’s name limited the association of the idea to the elderly. WFRTDS sees its application more broadly than that.

Both Drion and the WFRTDS are clear in the distinction between the practice of euthanasia in Holland and this new proposal.

The rhetoric is eerily similar to Nitschke and Exit: current euthanasia and assisted suicide laws are medical models that only partially give voice to autonomy. As NVVL chief executive officer Rob Jonquière, pointed out: “People want the right to choose to end their life independent of doctors or illness.”

This independence from any medical model has implications. As observed already, there are similarities in the proposals to the modus operandi of Exit and Philip Nitschke.

Another Dutch right-to-die club, The Co-operative Last Will, are also pushing this barrow. They seem willing to sail close to the edges of the law in advocacy and information in a similar way to Exit. They are promoting ‘a new drug’ but refuse to identify it.

“The stuff is legally available and deadly in pure form. It has already been used by people who wanted to commit self-exploitation. There have also been several murders committed by the means.”

This is dangerous talk. As we have seen with the Nitschke methods, people who are not otherwise ill and people who suffered depressive illnesses have been caught up in the hype with devastating personal and family consequences. The reference to murders is chilling: clearly people have been tricked into consuming the drug.

Again, like Nitschke (who once said: “There will be some casualties…”), The Co-operative Last Will organisation is frank about the possible collateral damage:

“The Cooperative Last Will the own members (3,500 people) point out the existence and functioning of the new drug. The club realizes that it involves the risks. An extreme consequence could be that children give the means to their old and wealthy parents because they want to claim their inheritance.

"That kind of criticism is to be expected. But the sale of rope is also not forbidden, and so people rob themselves of life, "says a spokeswoman.” (Emphasis added)

A glib retort and hardly apposite. Robbing oneself of life is suicide – elder abuse to death is murder. But who would ever know.

But collateral damage it will be. Far from stopping Dutch ‘right-to-die’ types in their tracks, such an acknowledgement seems more about deflecting criticism than it is about protecting Dutch citizens from abuse.

One wonders if the zeitgeist had not been infected this past 20 years and more with the Dutch strain of the euthanasia virus if there might have been more pause for thought. Given that Drion’s infamous idea predates Dutch euthanasia by a full decade; perhaps not!