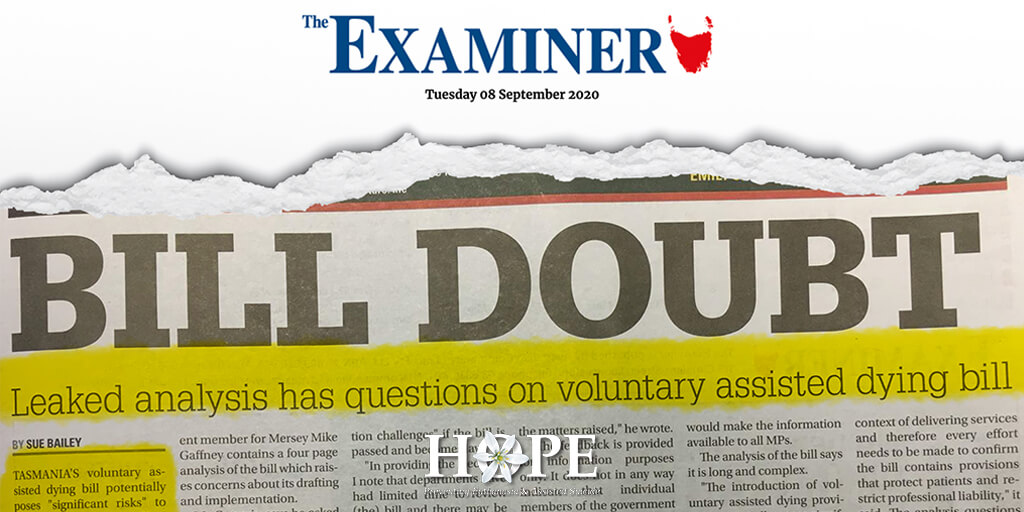 The wheels are certainly falling off the wagon for the euthanasia and assisted suicide bill that Independent Tasmanian MLC Mike Gaffney is trying to push through Parliament without the scrutiny of a public inquiry such as occurred in other states.

It seems that every day, news of the bill’s fatal flaws are reaching the media, thanks in a significant way to HOPE and our supporters!

Yesterday, Tasmania’s Examiner newspaper reported a crushing blow to the Gaffney bill that came by none other than Premier Peter Gutwein himself.  In a letter from Premier Gutwein to Mr Gaffney, the Premier confirms that government departments have had limited time to review the bill, and recommended further external advice be obtained.

The letter also confirmed that the introduction of euthanasia and assisted suicide potentially poses significant risks to patients and medical professionals, and slammed the proposed implementation time-frame of one year as insufficient, especially given the allocation of medical resources to the current COVID-19 crisis.  The letter also questioned the bill’s allowance for a medical professional who is not skilled in certain medical conditions to nonetheless diagnose that condition, and provide an approval for death on that basis.

This slap down from the Premier followed a report on the concerns about the extreme Gaffney bill that HOPE has been speaking about since it was first released.  These included that the bill would allow a doctor to sign-off on a patient’s death without ever having met or examining the patient, and that the timeframe between initial and final request can be as little as four days.

Responding – finally – to HOPE’s concerns, Mr Gaffney’s rebuttal was laughable.  According to the Examiner:

“Mr Gaffney said the two 48-hour time frames provided safeguards for people to consider VAD and each request would not be immediately processed.”

In other words, the 48-hour timeframes are being billed as “safeguards” rather than “red flags.”

There was also the words of Associate Professor Marion Harris, an oncologist, who publicly expressed her shock that the Gaffney bill “permits maximum access at the expense of safety.”

“Its eligibility criteria are broad and its safeguards few.

“Any competent adult with a serious incurable medical condition, excluding a mental health condition, who claims to have - or to just anticipate - intolerable suffering, (which can only be self- determined) is eligible.

“There is no need to be terminally ill. This isn't just for those who are dying. It is also for those with years left to live.

“Osteoarthritis (wear and tear arthritis), epilepsy, chronic airway disease, frailty, and diabetes are all conditions that would meet the criteria.

“Any adult in Tasmania who develops depression with its associated suicidal tendencies and impaired judgement who also has another condition would be eligible.”

Her concerns weren’t limited to the broad reach for patients, but for doctors as well.  She continued:

“Assessing doctors or nurses don't have to know the person beforehand and are not required to meet them face to face before the time of lethal drug administration, as all assessments can be undertaken via telehealth.

“The two assessors need no specialist qualifications in the person's illness or in palliative care, and there is no minimum years of medical experience required.

“An orthopaedic surgeon and a pathologist could enable the person to end his or her life, as could a newly graduated doctor.

“The only requirement is that assessors have completed a one day online course.”

Whether it be the concerns raised by HOPE, by medical professionals or even the Premier himself, the gaping holes in Mr Gaffney’s “perfect” bill are beginning to show, and not a minute too soon!