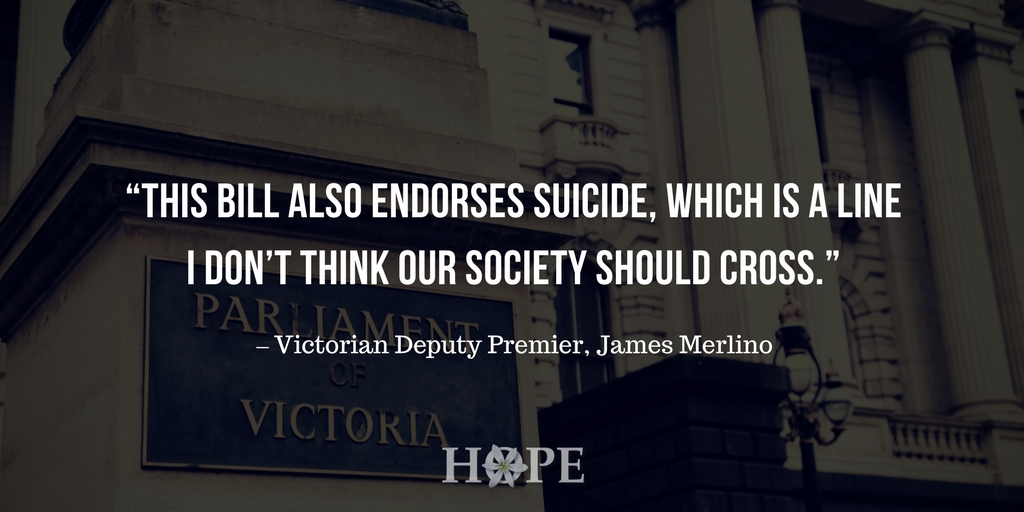 “I have deep concerns that these laws put at risk some of our most vulnerable Victorians, who could be subjected to coercion,” he told the Herald Sun newspaper.

“This bill also endorses suicide, which is a line I don’t think our ­society should cross.”

At the same time, another article in The Australian shows that Victoria is deeply divided on the issue.

“The statewide poll, conducted by anti-euthanasia lobby HOPE Inc, revealed 49 per cent of respondents did not want the proposed legislation to be rushed, claiming too many unanswered questions remained. A further 21 per cent were adamantly opposed to legalising euthanasia.

“Just 30 per cent said, “just get on with it and legalise it”, when asked their preferred outcome.”

There is no consensus within the government nor across the state.

The Herald Sun is quoting un-named members of parliament calling the vote as ‘close’.

The poll also gave a very clear indication that Victorians don’t trust their government to get it right:

“13 per cent of respondents believed the state government should be able to decide the issue, while 55 per cent backed a people’s referendum and 32 per cent singled out the federal government.”

I told the Australian that the polling suggested voters were sending the Andrews government a strong message on the issue:

“There is simply no electoral mandate for this legalisation and there is no trust to get this process right,” Mr Russell said.

“Overwhelmingly, Victorians do not want to see this rammed through by the state parliament.’’