Mercy and euthanasia? A worthwhile reflection

Georgia Blain is a novelist. She also has a regular column in The Saturday Paper under the title: The Unwelcome Guest; a monthly column about her own struggle with brain cancer. In the March 26th edition, she talks candidly about the difficulties supporting her mother, famous Australian journalist, broadcaster and author, Anne Deveson (pictured below) who was diagnosed with Alzheimers in 2014 in the context of her own diagnosis and thinking about euthanasia.

She opens by posing the question: Euthanasia is often described as a caring act, but should the ongoing needs of the dying take precedence?

She begins to unpack her answer by reflecting on her mother and her thinking on the issue:

"One of the few things that terrified my mother was Alzheimer's.

"I want you to put a pillow over my head rather than me go to one of those places," she always said to me.

As my mother got older she had pacts with friends to knock her off, and crumpled directives in her handbag to not resuscitate in certain circumstances. 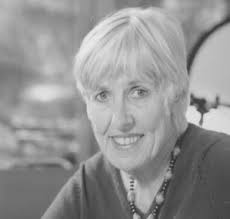 And then, at 84, she confronted her worst fear with a diagnosis from a geriatrician who had no idea how much the word "Alzheimer's" affected her. It was her birthday, and as we walked back to the car, she was literally unable to speak.

At first she didn't want anyone to know, but then in a turnaround that surprised even me, she managed to will her terror into an acceptance of the illness."

"Although my mother knew the likely progression of her Alzheimer's, she never once wanted to die.

She is now in a home - not strapped to a chair, nor doped to eyeballs - but her quality of life is not good. She is anxious most of the time. She stays in her room, unable to read, listen to the radio or watch television.

Yet, I'm not sure if she would choose death even now. There is still some hope, somewhere deep inside, that she will get rid of "this Alzheimer's".

During this time as Blain recalls, she bagan to think more deeply on the issue:

During this time, I was reading Karen Hitchcock's Quarterly Essay on caring for the elderly, "Dear Life", published in early 2015.

Like most left liberals, I had unquestioningly supported euthanasia. The essay was an uncomfortable read, one that highlighted how complex the issue is. Whose suffering are we trying to ease? The patient's? The family's? The supposed strain on the budget of the healthcare system?

She tells of her own diagnosis and its impact on her relationships and views:

Since she went into a home, I received my own diagnosis of brain cancer, following a total global seizure. There have certainly been times when I wished my mother would die, so that I no longer had to look after her. But I couldn't choose that for her. Instead, her friends and I are doing our best to try to ease her suffering, to make her a little less agitated, even if it often feels futile.

When you are elderly or ill, most of the time pain can be relieved, but patients dread becoming a burden for their families, a drain on the system. Hitchcock argues that we as a society have a duty of care, to ensure that people who are dying feel supported as they transition from life to death.

Blain then gives us a poignant insight into her own thinking about the progress of her own disease; whether or not to continue or cease treatment, whether or not to include a Do Not Resuscitate statement in her advance directive. These are all personal and valid considerations and the conclusions are entirely personal and ethical. But even here, as she explains, issues such as tiredness, illness and the effects of treatment make one vulnerable to mood swings and the understandable thoughts about changing one's mind.

When I first came out of surgery and in the period in which I recuperated before chemotherapy and radiation started, I told most of my doctors that I wanted to be able to choose when I terminated treatment.

Of course, they all said.

I know that I still want that, but I am unsure as to what circumstances would lead me to make that decision.

When I was in intensive care, I told Andrew, my partner, that I didn't want to go through another craniotomy if the tumour returned. I was adamant. I am now a lot less certain.

Every time I finish a round of chemotherapy, I don't want to go through it again. On the fourth day of treatment, which is always my worst day, I would prefer to die. Two days later, my strength returns, and I know I will do another round.

I have huge swings in mood and in my capacity to cope. When I am particularly bleak, there are times when I think maybe it would have been preferable if the seizure had taken me out, if Andrew and my daughter had not been home and I had hit my head, or stopped breathing, and I had died right then and there. I wouldn't know. I would be gone, and I wouldn't have had to go through this exquisite torture of being acutely aware that my days are numbered, although the exact count is difficult to measure.

But would this mean that I would sign an advanced directive not to resuscitate in the event of another seizure, given my prognosis? Aside from the fact that I may end up alive but in a vegetative state, I don't think I would.

Her thinking then develops more or less along the lines of the classical concerns about legalising euthanasia:

If we were purely economic animals, it would probably be hard to justify keeping myself or my mother alive, given our prognoses. At the moment I enjoy relative quality of life, but my surgery and treatment were and will continue to be very expensive. It is the privilege of the rich, an extraordinary privilege.

You could try to justify the other side of the equation - the economic benefits of giving me life may include less likelihood of health and social problems for my daughter, and perhaps the costs of tidying up my mother's affairs and caring for her.

But I'm very aware that the expense of my few more years are exorbitant in a world where so many people don't have access to fresh drinking water, or enough to eat.

Yet, if the money wasn't spent on health who's to say it wouldn't be spent on bombs or freeways, rather than feeding the hungry?

Of course, we don't justify a human life and medical treatment on economic rationalism. But perhaps part of my new-found reservation about legalised euthanasia is an awareness that economics could creep into decisions about life and death. We need the hospital bed.

I am also keenly cognisant of the fact that we need to be absolutely clear about whose suffering we are trying to end.

There are days in which I feel caring for my mother is too much. If I lived in a society where euthanasia was legalised, I possibly could go with my mother's advanced directive and make a plea for ending her life. I could say that she is anxious and agitated; that she has little enjoyment left, and it is only going to diminish.

But is it more my suffering that I am trying to end?

In terms of quality of life, how long before I will be in her shoes and what will I want then? I may want to stop treatment. I may go further, and beg my doctors to end my life. The next day I may have hope again. And perhaps because I can't trust myself when I am ill like this, I would prefer to trust in an unassisted dying process.

So much of this fine article is worth quoting in full. Georgia Blain's closing thoughts included:

I am well aware I have been circling round and round the whole vexed issue of euthanasia, prodding and poking it, stirring up a whole lot of dust to obscure it, then running away, only to come back and circle it yet again.

But as someone who is closer to the other side of the river than I would like to be, I would like to know that I can trust in my doctors and the people who are near to me to help me die and, perhaps, at the end, when all hope is gone, to nudge up the morphine.

I know the system we have is not perfect. But I'm not sure legislating for euthanasia under certain prescribed conditions, which are always open to interpretation, would be either.

More importantly, perhaps we should spend less time debating the legalisation of euthanasia and do more to care for the elderly, the frail, the dying.

Most of us grow old, and we all die. I would like to think that we can feel supported during this time, and not feel that we are a drain on the system or a burden on our families. I am hoping that this will be the way it is for me when my time comes, and for those I love when they have to face their own mortality.

The Unwelcome Guest is a monthly column about Georgia Blain's life with cancer.

You can read the full article HERE (may be behind a paywall):