Organ donation and euthanasia – what could go wrong? 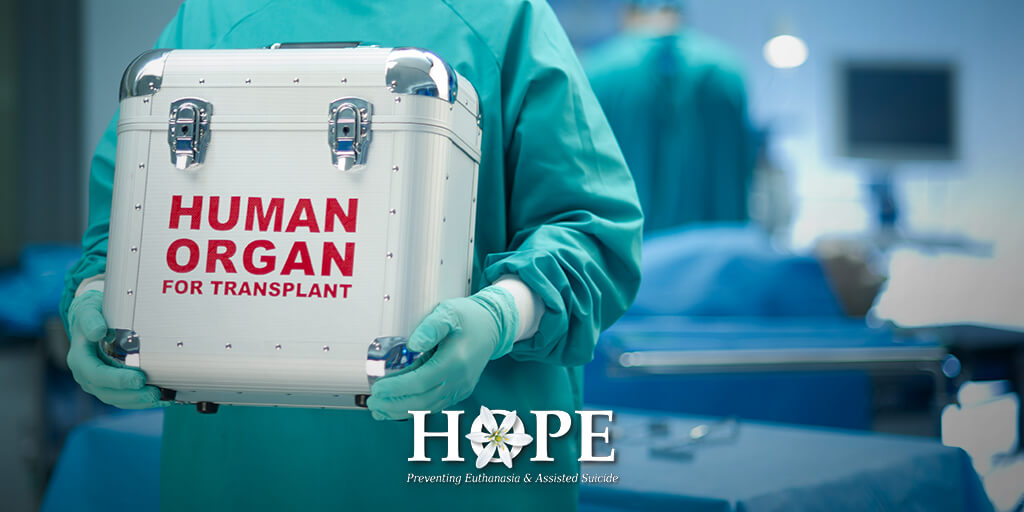 Organ donation is a medical practice that is almost universally supported as a public good in and of itself. It allows a very sick person whose own organs are failing to be given a second chance at life, through the donation of organs from the body of a person who is recently deceased.

However, things start to get tricky when the issue of euthanasia and assisted suicide are thrown into the mix.

World leading Australian expert in medical ethics and law, Professor Margaret Somerville, has explored the ethical and legal issues surrounding the practice of combining organ donation with euthanasia and assisted suicide in a new article published in the Linacre Quarterly. It makes for sobering reading; what new and complex issues open up when we combine the two practices? Where are we headed as a society? How should we proceed in this brave new world? What value do we place on human dignity?

In other words, what could possibly go wrong?

Whilst the discussion around this issue initially explored whether a person who qualifies for euthanasia and assisted suicide could also give consent, prior to their death, for their organs to be taken after death, it has, in a very short time span (less than 10 years), evolved to a discussion about whether terminally ill patients wishing to die by assisted suicide and donate their organs could die by means of the organ transplant itself.

This issue has also been explored in some depth by E. Wesley Ely.

This practice is currently illegal because it breaches the ‘dead donor rule’, which applies everywhere around the world in relation to organ donation. The problem with the rule, say proponents who want to remove the prohibition on removing organs from live human beings is that whether a person dies a natural death or by lethal injection through euthanasia, “organs must undergo a period without blood flow before being harvested, which means they are not in their optimal state.”

The questions that arise are as follows:

“If we agree with obtaining organs for transplant from euthanized people, must their organs be taken only after death or should euthanasia be allowed to be performed by the removal of vital organs?”

The ‘dead donor rule’ however is not straight forward. One complicating issue is that “brain death” is not uniformly defined, and therefore questions naturally arise about the point in the death journey at which it is ethical to remove a person’s organs.

The next chapter of this ongoing discussion has seriously entertained and proposed the idea that it might be preferable to ignore the dead donor rule when it comes to patients who want to die by euthanasia and also donate their organs. Whilst this approach focuses practically on the benefits of organs that haven’t been “compromised”, there are broader legal and ethical considerations.

One is the effect it would have on the way our society would come to view death and dying, and human dignity more broadly.

Would it encourage more people to die by euthanasia in the hope that their death could somehow transform a person’s own sense of hopelessness and in turn bring life to another person?

Would death by organ donation create a perverse new incentive for people to euthanise themselves? It seems a ridiculous notion, but upon an examination of widely available statistics about the reasons people choose euthanasia, the idea doesn’t seem so far-fetched:

“Feeling that life has no meaning and asking for euthanasia are both factors associated with the loss of the will to live, which is often manifested as demoralization or experiencing hopelessness – the person believes that he or she have nothing to look forward to, no sense of a connection to any future. For these people feeling that death by euthanasia does have meaning could reinforce their desire for euthanasia.”

“Might a person donating organs after or by euthanasia experience a feeling of greater dignity from doing so, because they are helping others through their death? Research shows that feelings of loss of dignity and feeling a burden on others are major reasons for requesting euthanasia. Might people donating organs after or by euthanasia also see themselves as less burdensome and as a consequence, having more dignity?”

As Professor Somerville rightly points out however:

“… surely it is to be hoped that we are not such a morally impoverished society that the only way a terminally ill person could avoid feeling a burden on others is to have themselves killed in a ‘useful way’?”

This is a scenario that when played out logically, raises some chilling consequences:

“A patient might … feel that saving another person’s life makes them a hero. It might help them to believe that their death has meaning. They might even feel that they are leaving a legacy for the future – people can die more peacefully, have a ‘better death’ if they can feel that they will not be forgotten, that they are leaving something that, in the future, when they are no longer present, will represent them to others. They might even imagine that they continue to exist in some form through their organ donation.”

Other issues concern the rights of people receiving the organs to know their origins and the circumstances in which they came into possession of the donated organs. For instance, should an organ recipient be told that their organ donor died by means of euthanasia? In other circumstances, a person must be given facts such as whether the organ is infected with a disease, for example such as Hepatitis C virus.

“Is a connection with euthanasia a ‘defect’ with respect to the organ which must also be disclosed? Might a person receiving an organ from a euthanized donor suffer psychological harm when they later learn of the organ’s source?”

The conclusion rightly reached by Professor Somerville is that ‘death by donation’ fundamentally offends the inherent dignity of the human person:

“Respecting dignity requires, as philosopher Emmanuel Kant contended, that we see and treat people as an end in themselves, as having inestimable value just because they exist and are human; we must not treat them simply as a means to be used for some other purpose, even if that purpose is to benefit others. In euthanasia by donation, the person is overtly employed for a further purpose, even more so than in organ donation after euthanasia.”

Professor Somerville has highlighted some extremely important questions we as a society need to ask ourselves before blindly heading down the dangerous path of legalising euthanasia and assisted suicide.