No new commitment to palliative care.

This story is written by Amy Hasbrouck. It includes quotes and sections translated from that an article by Davide Gentile of Radio Canada that appeared in the Huffington Post online on May 4, 2016. Link to the original article.

Amy Hasbrouck - is a lawyer and the founder of the disability rights group Toujours Vivant - Not Dead Yet and is the EPC Vice President. 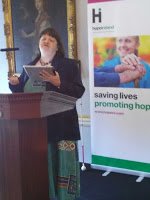 Five months after Québec's euthanasia law went into effect, about fifty people have been euthanized according to health Minister Gaetan Barrette, according to an article by Radio Canada that appeared in the Huffington Post website.

Health Minister Barrette said the rate is normal. "Many people were waiting for the implementation of the law," said Gaétan Barrette. "I do not think we are headed to unbridled growth," he said.

Some doctors who work in palliative care are concerned that more emphasis has been placed on the roll-out of the euthanasia program than toward providing palliative care.

"We do not feel the same mobilization to increase access to palliative care," says Christiane Martel, president of the Quebec Society for Palliative Care. "The majority of people still want to just comfort care at end of life."

Martel recalls that access to quality palliative care was the primary objective of the Act concerning the end of life care adopted in June of 2014.

"In palliative care, we do not see much improvement in resources. But we see a lot of resource mobilization for medical help to die."

Dr. Martel is concerned that meagre hospice care in some regions will affect the number of requests for euthanasia. "I think we must ensure that no one requests medical help to die because we did not have the proper care," she said.

Martel's colleague Marjorie Tremblay believes that there is a serious problem.

"What I see in my field every day are patients who don't have palliative care in their area. I find it appalling!"

She believes that patients whose pain is relieved overwhelmingly reject medical help to die.

Tremblay also deplores the confusion among some people between physician assisted dying and palliative care; they simply want to avoid suffering in the dying process. "Some people are afraid they will be given the lethal injection if they come into palliative care," she said.

Health minister Barrette believes their findings are exaggerated. "I do not think people say, "If I don't get a palliative care bed, I will ask for medical help to die!" I am convinced that it does not happen," insists Barrette.

He says that with few exceptions, the number of palliative care beds in institutions is sufficient. Improvements need to be made, for example, in the Shawinigan area and in eastern Montreal.

However, the minister admitted that home-based palliative care services must be improved. Currently, about 11% of Quebecers end their days at home. Quebec wants this number to increase to 22% within 5 years.