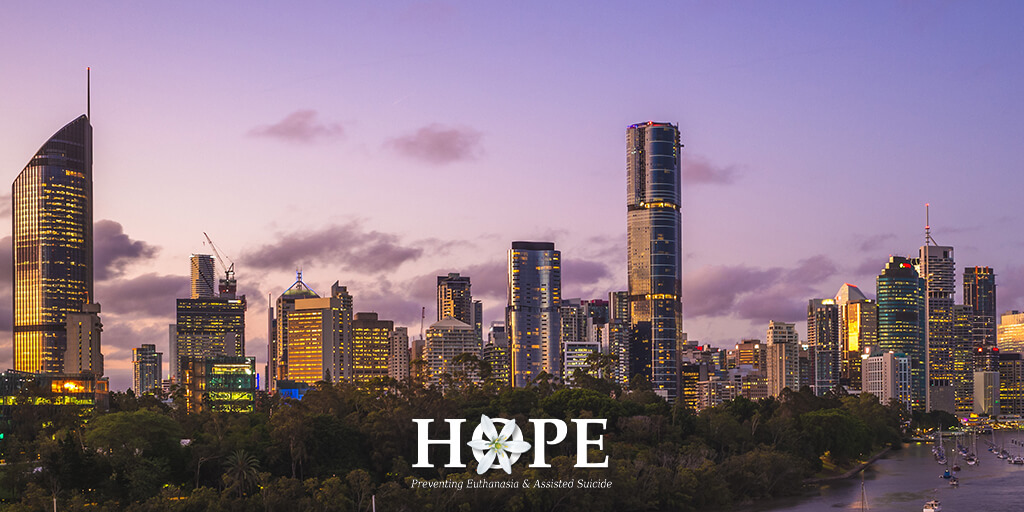 Late July HOPE was on the ground in QLD meeting various stakeholders with whom we’ll be orchestrating a coordinated effort to push back on QLD’s euthanasia lobby.

Thanks to your support, we’ve been working hard since the QLD parliament launched their ‘Inquiry into aged care, end-of-life and palliative care and voluntary assisted dying’ on 14 November 2018.

Together, you sent in 278 submissions!

Next, HOPE will be presenting our case at one of the Committee’s public hearings as it’s currently travelling around QLD conducting hearings on assisted dying.

Via these hearings, the Committee has already heard from many medical professionals on the very serious state of the health system in Queensland.

So appalling are the current conditions in aged care in QLD that Philip Nitschke, founder of Exit International, boasted just this month that “membership at the Gold Coast branch of his Exit International had skyrocketed to become the highest in Australia” because “many retirees did not want to go into an aged care village.”

In Nitschke’s words, “We have a number of cases of people faced with a choice of going into a nursing home who make the decision for a peaceful, elective death."

It would be negligent in the extreme of the government to provide Queenslanders with the option to kill themselves while not addressing the very serious shortcomings of the care provided.

Once the inquiry is complete and the committee reports back to parliament on 30 November 2019, a bill will in all likelihood be drafted.

In the meantime, this month HOPE wrote to each QLD parliamentarian to inquire after their stance on euthanasia and assisted suicide – it’s never too early to engage in targeted advocacy!

Once the draft bill is released, we will work with supporters to facilitate communication directly with politicians, enabling you to make your voices heard on this incredibly important issue.

As a supporter, please take every opportunity to spread the word to friends and family about the negative consequences of legalising euthanasia and assisted suicide for the vulnerable in our communities and invite them to write to their MPs.

Friend, QLD have flagged they’re open to a most radical regime.  Every effort to counter this push for death on demand counts.