The No Euthanasia Alliance (NEA) believes in the value of each human person. We are concerned that our social conscience, and particularly society's views on the worth of human life will be permanently undermined by the legalisation of ‘voluntary assisted dying’. We believe that Queensland communities are strengthened and enriched through mutual respect for human life and through ensuring that effective, caring and compassionate care is readily available to the sick and dying.
A Parliamentary committee is currently considering whether to recommend that the Queensland Parliament legalise assisted suicide and euthanasia (termed ‘Voluntary Assisted Dying’ or VAD legislation by some).

The No Euthanasia Alliance is concerned that such legislation will undermine patient wellbeing and the provision of ethical healthcare and irrevocably impact upon our society. Queensland has the second highest rate of suicide in Australia.1 Mental health issues and suicide amongst particular groups, including our young, our elderly and our indigenous populations are already the focus of significant interventions and numerous programs.2 We are concerned that these programs are likely to be significantly undermined.

As a society, one of our important roles must be to protect the vulnerable. VAD legislation undermines the worth of vulnerable people by offering a government-sanctioned option for ending life prematurely. We are concerned that the Government-sanctioned nature of this option will increase the likelihood of vulnerable people feeling that they are a burden on society, and has the potential to increase the likelihood of vulnerable patients being pressured or influenced into prematurely ending their life.
Feeling like one is a burden on society should never be an acceptable reason for the state to facilitate one’s suicide. And yet, in the state of Oregon in the USA—which has assisted suicide laws very similar to what is in operation in Victoria and likely to be what is proposed in Queensland—there has been a steady increase in the proportion of people who have listed ‘being a burden’ as a reason for using these laws to obtain a prescription for drugs that will kill them. Between 1997 and 2002, 34% of people listed ‘being a burden on family, friends/caregivers’ as among their reasons for ending their lives. By 2018, that had increased to 54%.3 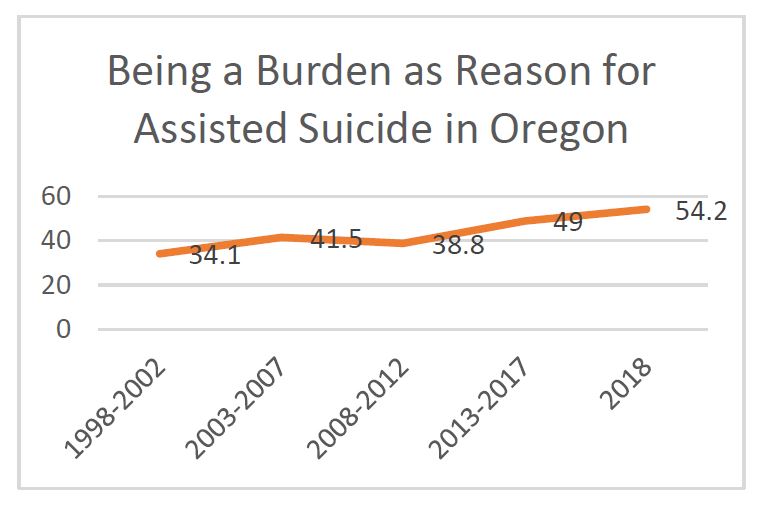 Similar legislation in overseas jurisdictions reveals a progressive broadening of the categories of people who can avail themselves of state-sanctioned assisted suicide or euthanasia from the terminally ill whose death is imminent to people who are encountering normal aging processes, people with disabilities and individuals suffering from depression, and mental illnesses.4

We believe that it is important that patients who are vulnerable, whether due to ageing or physical or mental illness or incapacity can trust in a society and health system that continues to place the holistic care of that individual at the heart of patient care. We are concerned that this focus on the person will diminish if the State sanctions assisted suicide as an appropriate option for our vulnerable and dying.

Legalised VAD undermines the value and importance of palliative care and prioritises death over compassionate care.

Every Australian living with a life-limiting illness deserves timely and equitable access to quality, evidence-based palliative care and end-of-life care based on their individual needs.
According to Queensland Health, there are too few palliative care specialists in Queensland especially in rural and regional areas: “There are 49 palliative medicine specialists practicing in Queensland who work predominantly in a hospital setting for the public health system. The greatest number of specialists are found at Metro North, followed by Metro South, Gold Coast and Townsville HHSs.

Legalised VAD is a blank cheque for an unknown future.

While supporters of VAD will be eager to assert that safeguards prevent misuse, international experience shows that many of these safeguards are essentially ineffectual or can be changed over the course of time.

Recently, Oregon, for example, created an exception to its 15-day waiting period, allowing people who are ‘likely’ to die within the 15-day period to end their lives earlier. It is not clear how one could ever be sure with Oregon’s oversight framework whether a person really was going to die within 15 days or not.

In Western Australia, the bill under consideration already liberalises the safeguards of Victorian legislation.

Once we legally sanction physician assisted suicide or euthanasia there is nothing that prevents a government from liberalising those laws potentially at the expense of vulnerable people in our society.

Legalised VAD goes against the advice of medical professionals on the frontline.

Medical practitioners have an ethical duty to care for dying patients so that death is allowed to occur in comfort and with dignity. Assisted suicide and euthanasia shifts the focus and role of caregivers, particularly physicians, from preserving life to ending it – a seismic shift in the role of medical professionals. According to the World Medical Association:

“Physician-assisted suicide, like euthanasia, is unethical and must be condemned by the medical profession. Where the assistance of the physician is intentionally and deliberately directed at enabling an individual to end his or her own life, the physician acts unethically.”11

The No Euthanasia Alliance strives for compassion and dignity in our health system.

Legalised VAD presents a major threat to the ethos of our society by undermining the value we have always placed on the worth and dignity of every individual in society and their right to effective and compassionate care.

We urge all Queenslanders and our elected representatives to uphold these values and oppose state-sanctioned, tax-payer-funded assisted suicide.

9 Kathy Eagar, Sabina Clapham, Samuel Allingham, “No, most people aren’t in severe pain when they die,” The Conversation, 11 December 2017; available at https://theconversation.com/no-most-people-arent-in-severe-pain-when-they-die-86835