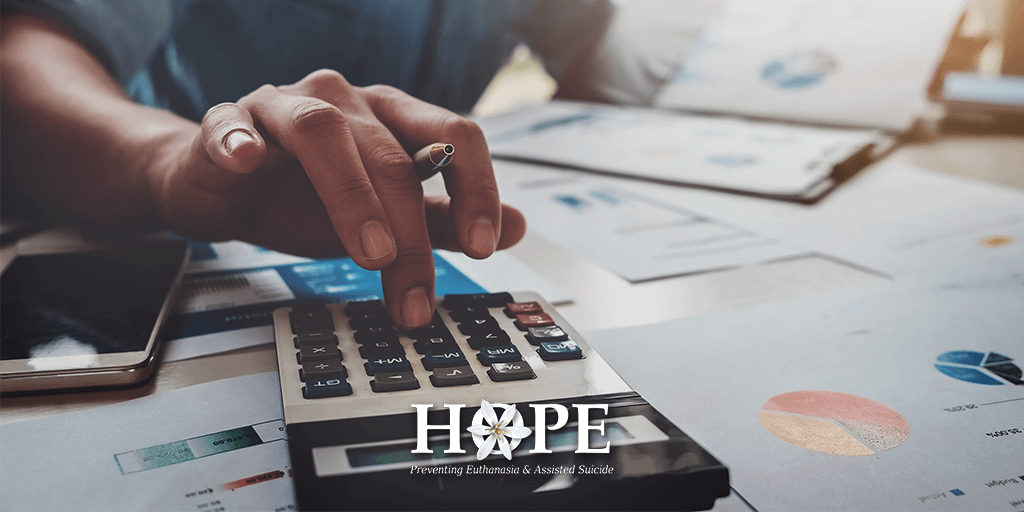 A self-confessed “progressively social liberal” writer and researcher who “proudly identifies as a disabled person”, Chris Ford has found himself in an unlikely position: opposing euthanasia.

In an article worth a read, Ford walks his readers through his journey from pro euthanasia to anti death on demand.  But what he calls his “ultimate argument” is, quite simply, Government spending.

Wouldn’t the legislation [legalizing euthanasia] be an effective weapon in a time of economic austerity when spending on social services would be even tighter than it is now?  …why not take the quicker, easier and cheaper way out – death!

Ford raises a poignant point, laying bare the elephant in the room no one wants to talk about: the harsh economic reality that assisted living is infinitely more expensive than assisted suicide.

The issue is as unsavoury as it is factual: living costs money, living with assistance due to age or ailment costs even more – far more than the vast majority of people can afford

Factually, euthanasia stands to save Government billions in healthcare and aged care.  The cost-effectiveness of euthanasia and assisted suicide was confirmed by Canadian researchers who, less than a year after these practices were legalised, published research that found that such a regime “could reduce annual health care spending across Canada by between $34.7 million and $138.8 million.”

Caring for our elderly and terminally ill is expensive. But it is also a non-negotiable, fundamental duty of government.

Whilst Ford writes from New Zealand, the issue has never been more pertinent in Australia.

In a recent article titled, “The costs of an ageing population keep growing, but who's going to pay?”, the ABC reported, “The politics may be tricky but future governments will have to confront the grim economic reality of the post-World War II baby boom.”

The statistics are staggering: in just 6 years the number of Australians aged 65+ will overtake the number of children aged 0-14.

Just last month the Parliamentary Budget Office warned that Australia’s ageing population will exert "historically unique" pressure on the federal finances in the decade to 2028-29, reporting that by 2028 Australians born 1946-1964 will cost the government more than Medicare does each year.

The working-age population is a net contributor to the federal budget, whereas older people are the largest recipients of welfare, aged care and health care services.

To quote the article, “While the Australian population has been ageing, life expectancy has also improved.  As far as the government's fiscal fortunes go, it's a perfect storm.”

One can only hope that the number of Australian jurisdictions vying to legalise euthanasia has nothing to do with the unprecedented size of our aging population – the likes of which we’ve never seen and do not have the infrastructure or the population to support.

One thing is certain: whether intentional or not, the timing is deadly.

HOPE’s challenge continues – to raise public awareness about what euthanasia and assisted really mean for society; that the vulnerable and elderly who feel themselves to be a ‘burden’ are most at risk from any moves to allow doctors the power to kill their patients.

The responsibility for governments in Australia is to prepare for the future and to ensure adequate funding for both aged care and palliative care for all who need it.

It’s our hope that, together, we will influence generations to echo Ford’s closing words:

before we can think about a good death, we need to build fair, equitable and just societies which can sustain good lives for everyone instead.  That’s how I’ve been moved to see things in recent months – how a good life can be lived and once done, a good death can follow. For that reason, [New Zealand] Parliament needs to reject the [euthanasia] bill and embrace real choice in living for everyone!