Tim Hammond on assisted suicide: “Once we start up this ride, we won’t be able to get off” 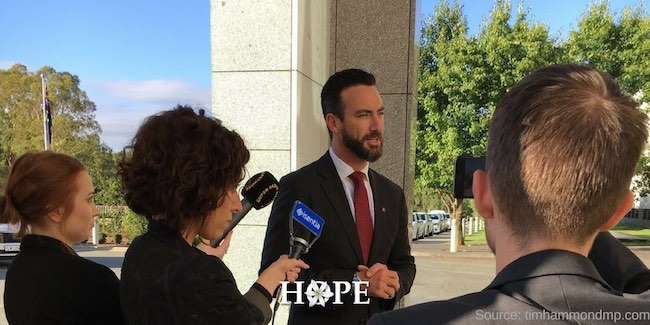 Federal Member for Perth Tim Hammond spoke out against assisted suicide, pointing to the dangers it could lead to and the need for more comprehensive palliative care.

Hammond had to watch his father die of a long-running illness when he was only 54, as well as his sister-in-law, who passed away from an incurable cancer at the age of 42.

He also worked as a lawyer on behalf on individuals with Mesothelioma. Having contracted the cancer from working with deadly asbestos dust, his clients usually only had around nine months to live. He worked to bring retribution to these individuals and their families.

Hammond articulately defends his position, citing the need for better palliative care and the danger of giving the same doctors who are supposed to save lives the ability to take them:

How do we reconcile the fundamental ethical obligation of our physicians not to be “involved in interventions that have as their primary intention the ending of a person’s life”, yet under this legislation, they are integral to the process of knowingly ending a person’s life prematurely?”

There is a world of difference between a doctor not taking active steps to preserve the life of someone at the end stages of their disease and unequivocally ending another person’s life, which is what this legislation contemplates.

Perhaps the most troubling thing about the prospect of lawful euthanasia is that we don’t know where it will end up… I have a terrible feeling that once we start up this ride, we won’t be able to get off it.

He also states explicitly that he would have opposed the Victorian legislation.

It is a shame that the legislators in Victoria did not share Hammond’s view. However, it is encouraging to see an Australian politician that is willing to take a stand against assisted suicide, and protect the lives of vulnerable individuals.