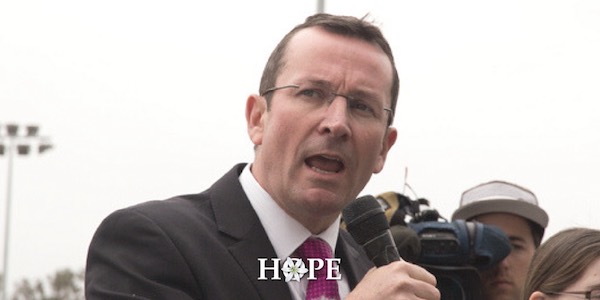 WA Premier Mark McGowan has already publicly declared his support for legalised killing in advance of hearing the results of a parliamentary inquiry into end of life choices, and without seeing any draft legislation anticipated to be introduced to Western Australia’s Parliament this year. Mr McGowan has made his decision, despite the parliamentary committee only being a third of the way through its task, with no legislation before parliament under consideration, and in disregard of the Australian Medical Association’s opposition to euthanasia and assisted suicide. The West Australian reports:

Mr McGowan said he expected the committee’s report in mid-2018 and that it could come down to a conscience vote by elected MPs.

“My position is very clear — I personally am in favour of voluntary euthanasia with comprehensive safeguards,” he said.

“The fact of the matter is doctors currently make decisions in respect to whether people continue to live or not when they are in pain or terminally ill. All I want to see is people make their own decision about their future, rather than someone else making it for them — I think it is entirely rational.”

However, the Premier’s personal support of the bill is radically out of line with the position of the Australian Medical Association. He has also prematurely taken a position without regard to the carefully sourced data based on over 680 submissions made to the  inquiry.

Dr Omar Khorsid, president of the Australian Medical Association, released a detailed statement in response to Mr McGowan’s statement. In the document, he reaffirms the AMA’s opposition to the practice, and suggests an alternative course of action: providing better palliative care.

“The AMA would like to see the debate around euthanasia broadened and a discussion on end-of-life care to take place,” he said.

“With an ever-growing and ageing population, a renewed focus on palliative care is vital for both State and Federal governments.”

“The AMA opposes medical intervention of which the primary objective is to end a patient’s life. However, the AMA will continue to advocate for improved palliative care, and supports an open, robust discussion.”

It would be preferable for Mr McGowan to reserve his decision until he hears what his own parliamentary inquiry, informed by the constituents he represents, has to say on the matter.  If their Premier is willing to back assisted suicide without waiting for basic information about what such a regime might look like in WA, what hope do WA residents have that concerns presented by the parliamentary committee, the medical community and the people of WA will be taken seriously by any politicians?