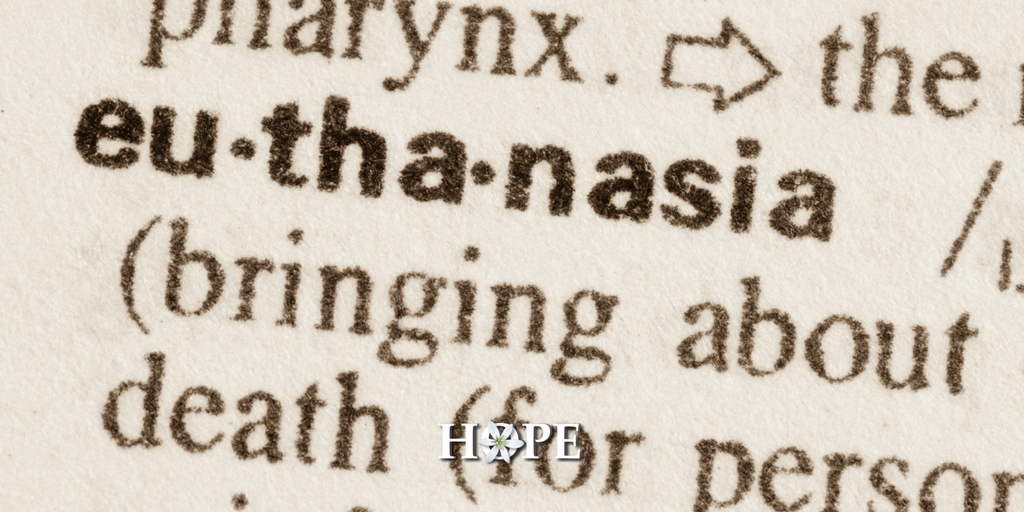 The worldwide movement to enshrine legislation to enable certain people to die prematurely either at their own hands, with medical support, or directly, by the actions of a doctor, is nothing if not a chameleon.

The World Medical Association defines ‘euthanasia’ as, ‘the act of deliberately ending the life of a patient.’ It also defines ‘assisted suicide’ as where ‘the assistance of the physician is intentionally and deliberately directed at enabling an individual to end his or her own life.’

Unmistakeably, in acts of euthanasia, the subject person’s life is ended by the direct and deliberate action of a doctor who, by his or her actions, kills the person. Unmistakably also, a doctor who provides assistance (usually in the form of a prescribed lethal dose) so as to enable a person to take their own life using that substance, assists in their suicide.

Yet repeatedly over recent years we have seen the adoption of euphemisms that attempt to disguise these realities. Bill titles worldwide such as, ‘Death with Dignity’, ‘Dying with Dignity’, ‘End of Life Options’ and, my personal favourite, ‘Patient Choice at the End of Life’ have obfuscated the truth.

The intention is clear: words like ‘euthanasia’ and even ‘suicide’ in this context have a clear ‘yuk factor’. That may be so. But surely the public have a right to the truth and the political classes, an obligation to legislate factually. Options? Choices? Dignity? Really?

British Actor, comedian and disability advocate, Liz Carr poked fun at the development of these euphemisms in her show: Assisted Suicide: the Musical in Melbourne in March. In one scene she is at a World Federation of Right to Die Societies meeting in Europe during a discussion about what new euphemisms they could adopt. ‘Dying with Dignity’, ‘Humane Self-Chosen Death’, ‘Self-Deliverance’, ‘Rational Suicide’ and ‘Dignicide’ were the top five in that brainstorming session that actually took place in 2014 when Liz was researching euthanasia. You can listen to her BBC podcasts HERE.

Either not part of the ‘top five’ or not discussed at that meeting because it was already beginning to be used is the term ‘Assisted Dying’, sometimes rendered: ‘Assistance in Dying’.

‘Voluntary Assisted Dying’ Bill is the title of the upcoming legislation in New South Wales and is the working title for the Victorian model, both slated for introduction into their respective parliaments this month (September).

That term was first defined, if not coined, in 2012 in the UK Commission on Assisted Dying report on the subject. Chaired by Lord Falconer, the ‘commission’ had no parliamentary or legal standing and was set up, funded and populated by persons bent on changing the British laws. Even though they drank the Kool-Aid on the euphemism, they did, however, provide clear definitions:

To ensure that the subjects under discussion remain clear, the Commission on Assisted Dying has used the following definitions throughout its enquiry and in this report:

But even in the Westminster debate that followed, confusion reigned – and it still does. In response to an article in the British Medical Journal by Professor Raymond Tellis in 2014 (title: Assisted Dying is Not the Same as Euthanasia), David Jones, Director of the Anscombe Bioethics Centre in London, had this to say:

“On the current website of Dignity in Dying it does indeed state that ‘assisted dying is not the same as assisted suicide, voluntary euthanasia or euthanasia’. However, on the same website under the heading ‘Assisted dying overseas’ it states that ‘a number of countries have passed laws to provide terminally ill people with the choice of an assisted death’ and lists the Netherlands, Belgium, Luxembourg and Switzerland, explicitly including ‘voluntary euthanasia’.”

Sometimes it is just a matter of getting the story straight! How can the public expect to grasp at the significance of such laws when they are sugar-coated with such emotive euphemisms and when the proponents don’t seem to grasp the false distinctions that they themselves created?

‘Patients may self-administer, or be assisted by their medical practitioners or a nominated person to administer, a lethal substance (as prescribed by regulations) to end their lives…’

It then is at pains to stress that, ‘The Voluntary Assisted Dying Bill 2017 (NSW) is a Bill that provides for physician-assisted dying, not voluntary euthanasia.’ Yet the draft bill describes both assisted suicide and euthanasia operatively:

assist or assistance, in relation to the death or proposed death of a patient, includes:

(b) if the patient is physically incapable of self-administering the substance:

(i) the administration of the substance to the patient, and

I invite the reader to consider what ‘administration of the substance to the patient’ means? Euthanasia anyone? Self- administration is a no brainer: it is suicide – with medical assistance. Yet no mention of either action by name anywhere in the bill.

Likewise, the Ministerial Advisory Panel’s report to the Victorian Premier on ‘Assisted dying’ only mentions euthanasia and/or assisted suicide in the context of a strained and incredible apologia for why they have adopted the term ‘Assisted Dying’ instead. Other than that, the entire 257 page document does not use the proper terms. That is, if you do not include the footnotes and references. There you will find numerous uses of the correct terminology in the citation of numerous studies and reports. Perhaps academia is yet to be infected with the same virus.

Words do matter. It would add insult to injury if the public were led by an ignorant parliament to a decision of such far-reaching and grave consequences.

And it is not as though the terminology itself is evolving towards something more descriptive and accurate. In fact, the reverse is the case. No, this is all about a sales and marketing pitch – we all want assistance when we’re dying and we normally associate that with good care.

Putting such a warm and aspirational spin on deliberate killing and helping people to suicide is reminiscent of the 1973 film Soylent Green and the futuristic state-run euthanasia clinic where submitting to have you life ended is called simply "going home".

Yes, this is inescapably about euthanasia and assisted suicide.