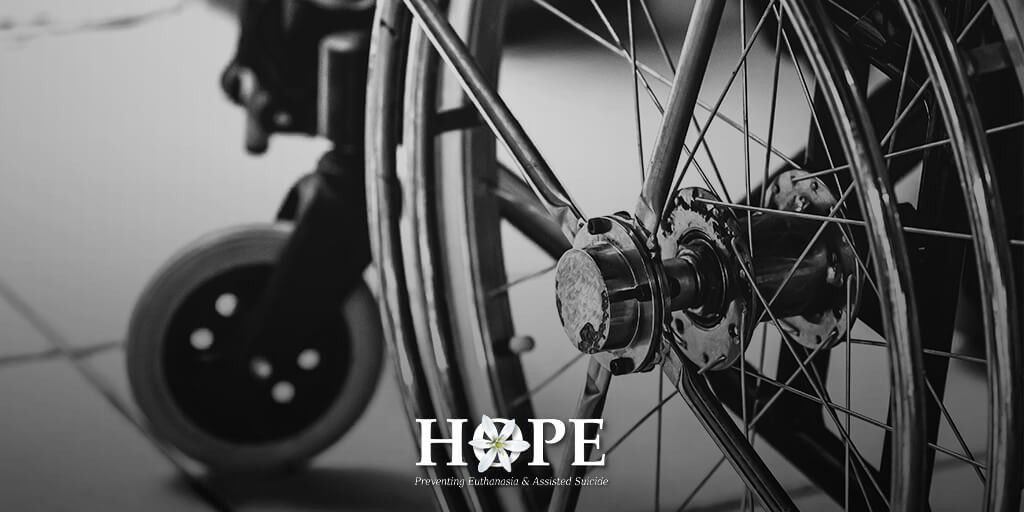 Disability advocates both here in Australia and around the world have been at the forefront of the movement opposing the legalisation of euthanasia and assisted suicide.  They highlight the inherent dangers of euthanasia legislation for people living with disabilities in the context of a society that daily makes value judgments about the “quality” or otherwise of their lives.

Paul Longmore, Professor of History at San Francisco State University argues that the legalisation of euthanasia and assisted suicide would “take place within the context of a health care system and a society pervaded with prejudice against people with disabilities.”

However, those speaking up in relation to this issue have been silenced, sidelined and dismissed.

“The disability rights viewpoint has commonly been excluded from public discourse about assisted suicide. Once again, disabled voices that conflict with dominant non-disabled perceptions are effectively silenced. Disabled citizens, who are directly affected by this issue, are rendered invisible.”

A tragic example of the prejudice experienced by people with disabilities in our health systems came to light this week. Michael Hickson’s treatment at the hands of medical professionals in the United States last month further confirms the fears expressed by disability advocates about this issue. People living with disabilities constantly experience others making assumptions or value judgments about their quality of life or levels of independence.

Mr Hickson’s story was disclosed by a pro-life media outlet:

Hickson became a quadriplegic in May 2017 after going into sudden cardiac arrest while driving his wife Melissa to work. He received CPR but suffered an anoxic brain injury from the loss of oxygen to his brain. Since that time, he has been conscious, alert, responding to jokes, laughing, shaking his head, singing, and puckering his lips when his wife asked for a kiss over FaceTime.

The in 2020, he contracted COVID-19 from a staff member in his nursing home and developed pneumonia. He was hospitalized at St David’s South Austin Medical Center, but doctors there refused to treat him, allowing him to die.

In a recorded conversation between the doctor and Melissa, she was told that he would not receive treatment due to his disability:

Melissa:          What do you mean? Because he’s paralysed with a brain injury he doesn’t have quality of life?

Mr Hickson passed away on 11 June 2020. He leaves behind his grieving wife Melissa and their children. Melissa is at a loss to understand how this could have happened:

“I’m struggling to understand how and why this could ever happen. I lost my best friend, my better half, the other half of my heart.”

The euthanasia movement and its message is entrenching and legitimising the view in our society that some lives are not worth living.

As Callum MacKellar, Director of Research of the Scottish Council on Human Bioethics has written:

“The claim that certain human lives do not matter or that they have less value and worth than others is now increasingly being accepted in society.”

If we start to make judgments about the value of individual human lives, where does it end?

“…if it is possible to evaluate whether a life is unworthy of life, it is also necessary to be able to grade every life in society based on its quality and the amount of pleasure it brings. But this then means that every person’s life becomes unequal in worth since those, for example, who are vulnerable an suffering may be seen as having less value. It may even imply that only the young, intelligent, successful, beautiful, strong and the happy may be considered as having a right to enjoy their lives.”

“It is also possible to ask who will decide about the worth of a life. It will certainly not be the weak and the defenceless. Instead, it is most likely to be strong and successful and those who may be in power.”

These are very real and important questions, with profound consequences for our society moving forward. A Pandora’s Box is being opened by the overturning of longstanding prohibitions against doctors killing their patients, and the after-effects are slowly and surely being realised.

The only safe way to ensure that we do not legitimise such destructive value judgments is not to legalise euthanasia and assisted suicide in the first place.