Legalising assisted dying is dangerous for disabled people. Not compassionate

By Liz Carr (Article first appeared on The Guardian website) 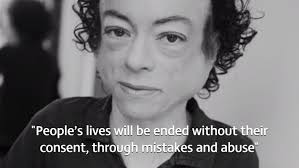 If I said I wanted to die, the press, celebrities and the public would support my choice, seeing it as rational and understandable. Hell, they would probably set up a go-fund-me campaign to help me make it happen.

Yet when a healthy, non-disabled person wants to kill themself it's seen as a tragedy, and support and prevention tools are provided. If nothing else convinces me that to legalise assisted suicide is not a safe option for many of us then this does. Suicide is not seen as socially desirable - so why is assisted suicide seen as compassionate when it's for ill or disabled people?

Marieke Vervoort, the 38-year-old Belgian Paralympian gold medallist, is only the most recent disabled person to announce that she is considering euthanasia, saying her "body is exhausted". She is not imminently dying. Yet no one seems to be trying to persuade her that life is worthwhile. Would Usain Bolt be met with the same reaction if he announced his decision to end it all after his last Olympics?

Although proponents of assisted suicide legislation say it's only for those with six months or less to live, they propagandise with cases like that of Daniel James, the 23-year-old man paralysed (but not dying) following a rugby accident, who killed himself at the Swiss clinic Dignitas after he said he did not want to live a "second-class" (that is, disabled) life. Jeffrey Spector, a 54-year-old man also not imminently dying, also killed himself at Dignitas.

The Netherlands, which legalised euthanasia to provide relief for the terminally ill, now regularly provides euthanasia for disabled people who can demonstrate "unbearable suffering". Canada, the most recent nation to legalise euthanasia and assisted suicide, allows it for "serious and incurable illness, disease or disability".

Usually, the two sides of the argument are characterised as "religious" (opposed to legalisation) or "secular" (in favour). But it's not that simple.

Frustrated by the lack of opportunity to have the voices of people like me - of disabled people - heard on this issue, I have decided to combine my activism with my career as a performer.

I've never seen a piece of art or theatre which expresses opposition to legalising assisted suicide from a disabled person's perspective - so I decided to try to rectify that. The result is Assisted Suicide: The Musical â€“ a show which premieres this weekend at the Royal Festival Hall, London, and marks the first anniversary of the defeat of the assisted dying bill in parliament.

There were of course religious people there with me and many others outside Westminster, on Friday 11 September 2015. But MPs who glanced out the window would have seen more Not Dead Yet (NDY) T-shirts and banners than religious ones. NDY is made up of disabled people opposed to a change in the law. Every major disabled group in the UK, it should be stressed, is opposed to this legislation.

Suicide is, of course, an individual choice. Disabled people who are determined to take their lives may even find it easier to do so than abled people, given the often precarious nature of their existences. But that does not mean that when a fellow human being - disabled or abled - expresses the wish to die because their life is shit, that we should agree with them. The value of a life is not just in its physicality but in our relationships with those around us.

The bill, had it passed, would have licensed doctors to assist in the deaths of terminally-ill people who had less than six months to live, were mentally competent and requested such assistance. But the direction legislation has taken in other countries shows that the sympathy we disabled people evoke can be used to justify support for us to kill ourselves while non-disabled people are told they have "everything to live for". How many times has someone come up to me and said how much they admired me just for existing because they could not, in my condition?

There is a fine line between those who are terminally ill and those who are disabled in public perception and the emotional power behind the campaign for assisted suicide is based on misplaced pity. Rather than telling us we have everything to live for - and we do - we are helped to the proverbial cliff edge and offered a push.

People - disabled and not, with many years or only a few months ahead of them - become suicidal for many, many reasons. We know from surveys in Oregon, one of just four states in the US where assisted suicide is legal, that the reasons people choose this option have little to do with pain, although this is always the emphasis of supporters of assisted dying.

In fact, loss of dignity, loss of autonomy, loss of ability to do daily activities, and fear of being a burden - reasons which are essentially more about the realities of living with a disability in our society - are all more important than pain.

It is worth keeping in mind, too, that, in the context of economic arguments about a health service overly concerned with "waste" of resources, disabled people may be seen as a drain, just like the elderly. We also know from the US that some people have been denied life-extending treatments because they are too costly while the cheaper assisted suicide option has been offered as an alternative. Think this won't happen here? Medical rationing is the reality of our overstretched NHS.

No one wants us, those we love or even those we don't to suffer and die in pain. But shouldn't we try to get end-of-life care right before we throw physician-assisted killing into the mix? Currently hospices and palliative care are only available to the few, and hospices continue to rely on donations for their survival.

Please, don't wish death upon us because you feel pity for our condition. It is demoralising when disabled people like Vervoort express - understandably - exhaustion with the everyday struggle of existence and discouragement with life and are met with sad, understanding nods. On Saturday, it is world suicide prevention day. Can we be included in suicide prevention efforts, too, please?

In Australia, the crisis support service Lifeline is on 13 11 14.