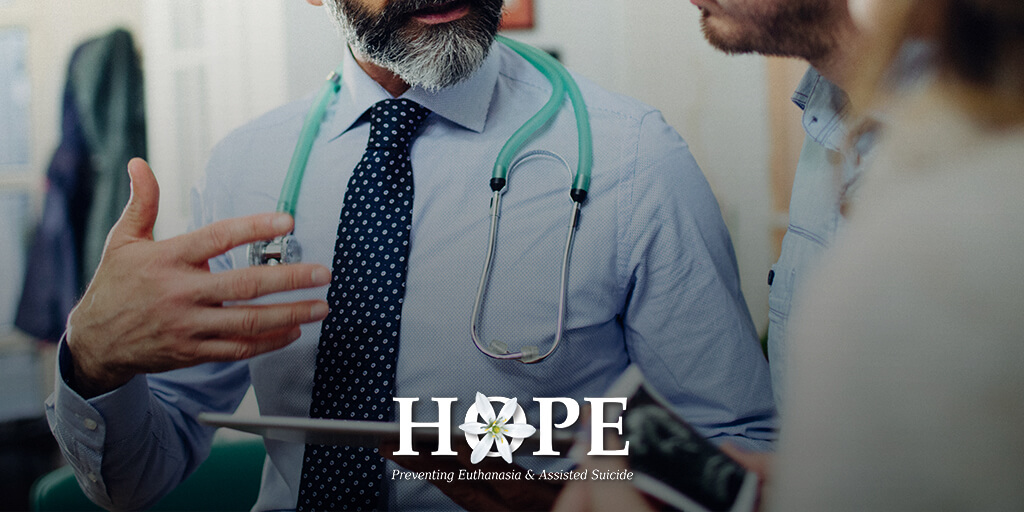 “..Now there is the option of voluntary assisted dying...”

What effect would these words from a doctor have on a vulnerable, terminally ill patient?

Despite boasting a so-called ‘102 safeguards’, ironically, the WA euthanasia bill includes a number of provisions which actually put patients at greater risk of wrongful death.

One of the most serious is the fact that the bill allows doctors to initiate the subject of euthanasia and assisted suicide with their patients. The Victorian law by way of contrast, specifically prohibits this.

Allowing doctors to initiate conversations about euthanasia or assisted suicide puts vulnerable patients at risk of undue influence from inexperienced, incompetent, exhausted or even unscrupulous doctors. It effectively leaves doctors free to ‘steer’ their patients towards euthanasia and assisted suicide.

The WA Expert Ministerial Panel on Voluntary Assisted Dying acknowledged that up to 60% of Australians have low levels of individual health literacy. This means that the majority of patients, not least of those who are seriously ill, are completely reliant upon their doctors to provide guidance and advice about health decisions.

The WA Bill also doesn’t require a doctor to be a specialist in the person’s illness for them to make a decision about a patient’s request for assisted suicide.

What kind of subtle pressure does a patient experience if their doctor raises the issue of assisted suicide? Does it convey to the patient (falsely or otherwise) that the doctor considers they would be better off dead? That there are no other options? That the patient’s situation is hopeless?

What happens if the doctor treating the terminally ill patient has limited knowledge or experience in relation to the patient’s illness or treatment options?

Do the terms of the WA bill provide a get-out-of-jail-free-pass for doctors who reach the limits of their own medical knowledge and need to ‘save face’? Who would ever know?

As Kylee, a young woman with who has been featured in one of #DefendNZ’s videos highlighting the dangers of the proposed euthanasia legislation in New Zealand has stated:

“What happens then, if one or two of those doctors were to talk to me about euthanasia? It would be very, very difficult for me to exclude that from my mind. I would feel a sense of pressure.”

Kylee has a rare connective tissue disorder which causes chronic (and sometimes intense) pain. Her condition is also terminal. She would arguably meet the criteria of the WA regime.

In his most recent article about euthanasia, Dr David van Gend quotes the predictions made by psychiatrists Frank Varghese and Brian Kelly about the dangers for terminally ill patients from euthanasia laws, not just from ‘selfish family members’ but also at the hands of ‘unscrupulous doctors’:

“Much of the debate about euthanasia and physician assisted suicide has as its underlying assumption that doctors will always act in the interests of their patients. This assumption fails to take into account the doctor’s unconscious and indeed sometimes conscious wishes for the patient to die and thereby to relieve everyone, including the doctor, of distress …Legislation to enable assisted suicide has been designed to provide a safeguard, through psychiatric assessment, that protects patients from themselves. What these laws do not do and cannot do is protect the patient against unconscious factors in the doctor.”[1]

Research conducted by Varghese and Kelly about the complex interplay between the doctor-patient relationship and a terminally ill patient’s desire to hasten death raises the following questions:

“… is the doctor’s inclination to support a patient’s wish to hasten death a personal response to the limitations they experience in offering other forms of care when confronted with a patient’s suffering?

Is it a doctor’s response to helplessness when faced with depression and demoralisation and a limited set of skills to identify and address these problems?

What effect does the persisting severe emotional distress experienced by the patient have on the treating clinician, especially when feeling ill equipped to respond effectively?”

Alarmingly, their study also found that “less training in the psychological aspects of medicine and counselling, as reported by the doctor, was significantly associated with a high reported wish to hasten death by the patient.”

There is an inherent power imbalance between doctors and patients. Laws that do not take into account the complexities of the doctor-patient relationship put terminally ill patients at risk. The role of government is to protect its citizens against undue influence, not provide a legal avenue for it to occur, particularly in matters of life and death.