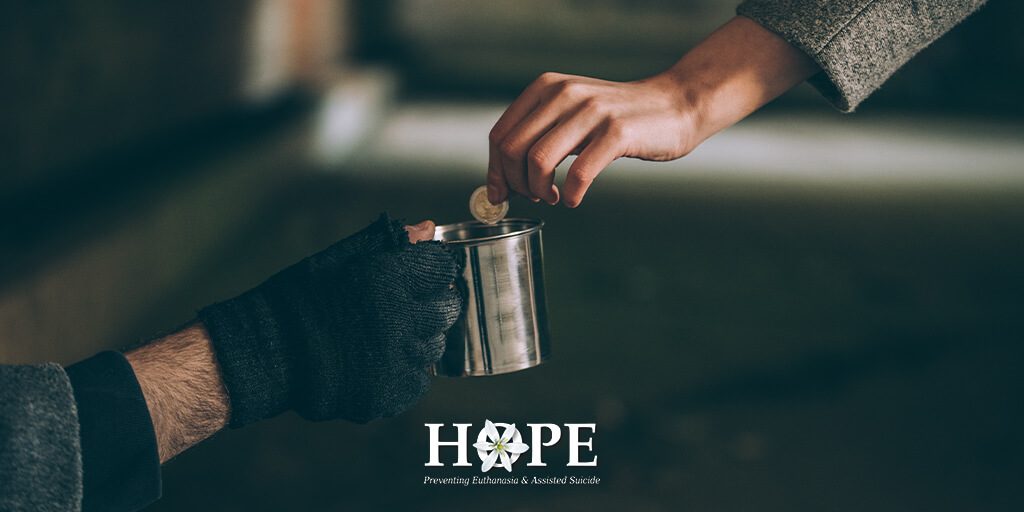 People living in Canada are speaking up about the lack of “choice” and “dignity” they experience if they have a disability and are reliant on social welfare to survive.

After paying $1000 in rent, Kim is left with $421 for all other expenses, including medications and meals.  Her landlord has now proposed an increase in rent of $400 per month, which would leave her with less than a dollar a day for food, medicine and other expenses.

Is it any wonder Kim has considered euthanasia?

“I have no dignity left, I don’t like to go anywhere or have anyone see me … I don’t feel like I’m worth anything to anyone anymore,” she told CityNews.

Dignity.  It’s a buzzword for euthanasia and assisted suicide advocates, who pretend that offering the “choice” of death is somehow offering dignity, rather than advocating for proper care and funding for people with disabilities.

Her comments were echoed by Patrick Doherty, who said that after paying rent, he is left with $2 per day for food.

Comorbidities really stretch the budget, with another woman saying that she chooses medication to manage her mental illness over food, borrowing funds from friends so that she can have anything to eat at all.

And this is turning them towards euthanasia, with Kim saying that she knows a staggering 50 people who have applied for euthanasia.

One of the big problems is that Canada’s disability pension is not increased in accordance with inflation so, as the years go on, people living with disabilities are able to buy less and less for their money.  In other words, they get poorer every year, and the COVID-19 pandemic has only made things worse.

Ontario Premier Doug Ford is unsympathetic, saying that the best way to help people on the disability support pension, “if they’re healthy and they’re able to work, get them a job, help them get a job,” which is a nice sentiment, but doesn’t assist for those who are not healthy enough to get a job, nor for those who are amongst the growing list of those unemployed due to COVID.

It’s not just the COVID crisis that has made people living with disabilities in Canada pressured to look for euthanasia.  Last year, the UN Special Rapporteur on the Rights of Persons with Disabilities expressed concern that there was no protocol in place to demonstrate that people with disabilities who are eligible for euthanasia are provided with “viable alternatives.”

The Special Rapporteur’s concerns seem to have been well-founded, with 61 per cent of people living with disabilities in Canada now struggling to pay for rent or medications.

Don’t be fooled by the buzzwords.  This is what “choice” looks like under a euthanasia regime.