No-one asked if I was okay 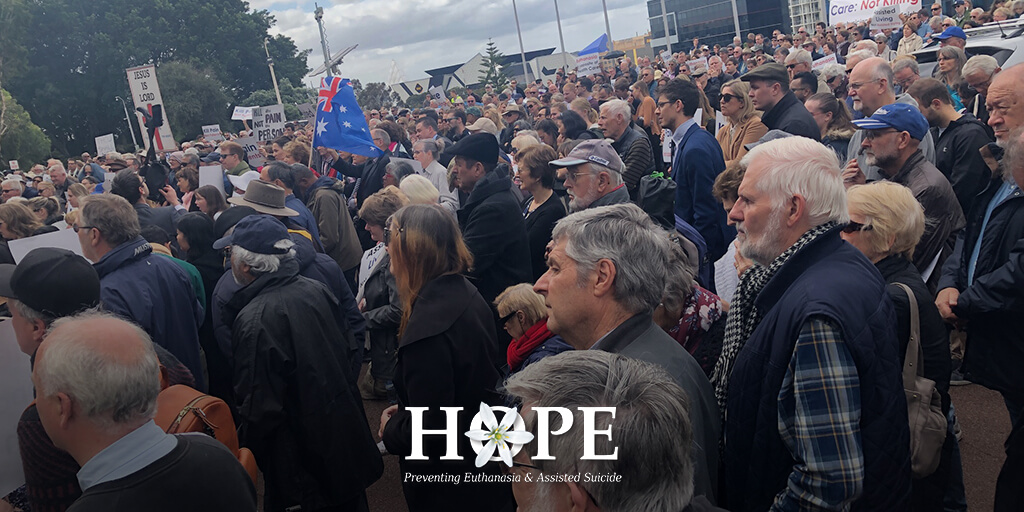 Three years ago, disability advocate Samantha Connor and a group of disabled friends conducted a small protest outside the Australian premiere of Me Before You, a Hollywood film about a wealthy banker who is paralysed in an accident and ends his life at Dignitas, the Swiss euthanasia clinic.

Connor, herself in a wheelchair, and her friends were protesting against the message that the film sends: that lives lived with disability should be ended.

At the Care: Not Killing rally last week in Perth, Connor told the frightening story about the protest:

"Because I'm completely hilarious I had a giant tin that said 'Send Me to a Swiss Suicide Clinic' and I rattled the tin after we'd finished our tiny protest, in jest, thinking that I was being funny.

"There were about 15 of us, all disabled people and the woman who I rattled it at put money into the tin and said: 'I support you.'

"And so we thought this was initially wonderful, we could rattle the tin for some time and then go to the pub.

"We took our tin and rattled it and over the course of the next hour, the smiles faded from our faces, because no single person said 'no'.

"There were people who said if they were in a wheelchair, they would also want to die.

"It was such an awful moment for our group of people and it was the thing that solidified for me that we actually can't safely put in place in this country assisted suicide legislation."

Today is R U OK? Day, a “national day of action dedicated to reminding everyone that every day is the day to ask, “Are you ok?” and support those struggling with life's ups and down.”   Suicide is one of the nation’s biggest killers, and today is a reminder that a simple conversation with someone going through a tough time can make the difference between life and death.

Her experience is consistent with the report from the UN Special Rapporteur on the Rights of Persons with Disabilities on her visit to Canada, where euthanasia and assisted suicide are legal.  The Special Rapporteur expressed extreme concerns about the implementation of such legislation from a disability perspective, receiving “worrisome claims about persons with disabilities in institutions being pressured to seek medical assistance in dying.”

The risk of such a message being absorbed by a person with disabilities is heightened in the proposed laws for WA, which allow a doctor to raise the option of euthanasia or assisted suicide with their patient.

Labor MP Tony Buti, who is pro-euthanasia but has a daughter with an intellectual disability and fears that she will be subject to the same type of discrimination, and open to the suggestion that she should take her own life, moved an amendment to prevent doctors from raising the issue.

“I can tell members one thing: my daughter can understand information. She can process information and she can make a decision, but what I am fearful of is that she wants to please.  “I do not want to deny people with disabilities the right to be involved in VAD, but I want to ensure that they have not been coerced at all. I am very fearful about that.”

The amendment Mr Buti proposed to protect his daughter was voted down by Labor and Nationals MPs.

Samantha Connor’s experience, the UN Special Rapporteur’s report and the voting down of Mr Buti’s amendments show that even with suicide prevention initiatives in place, vulnerable people are still at risk when assisted suicide and euthanasia are legalised. The only way to protect those with disabilities from being pressured into suicide by those who hold an unconscious bias against them is to not pass the laws in the first place.